Nevermind that I’ve worked in this building for nearly a decade. I’m not sure that I’ve ever gone to a costume fitting here. I have definitely been missing out! Today I went to a couple, and they were a ton of fun. Of course all I had to do was take pictures. Because this show is so enormous, costume fittings have become their own show. Lots and lots of people involved, and a lot of hard work for our amazing costume shop. I can’t wait to go back!
Below are some of the photos from cast member Jeff Meanza’s fitting – one of MANY he will have. Jeff is not only a member of the Nickleby cast, he is also PlayMakers’ Director of Education and Outreach and a graduate of the Professional Actor Training Program here at UNC. He was most recently seen in Amadeus and Well, and during his term as an MFA student here, he appeared in The Man Who Came to Dinner, A Prayer for Owen Meany, King Lear and Luminosity, just to name a few. In Nicholas Nickleby, Jeff is playing half a dozen characters and these photos only show fraction of those. 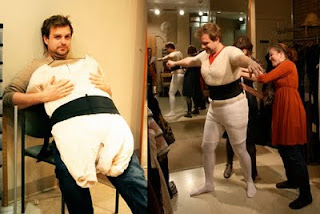 Jeff’s fitting has to begin with the putting on of the “fat suit” as most of his characters are much heavier than he is. Above we see him being assisted by Associate Costume Designer Jade Bettin and costume graduate student Kaitlin Fara. 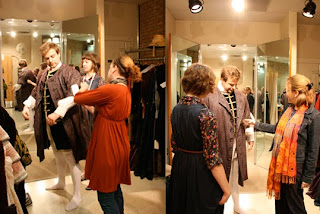 It’s important to find just the right combination of coat and vest for this character, so many options are tried out. Again we see Jade Bettin, Kaitlin Fara and Costume Designer Jan Chambers deciding this outer coat just isn’t right. 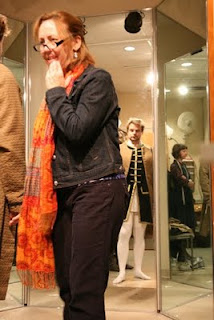 Jan ponders and then decides they’ve got something with this combo. 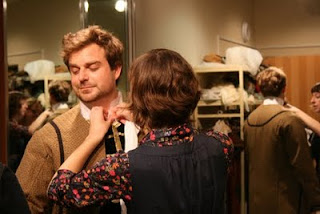 Jade takes a last measurement to make sure the fit is perfect. 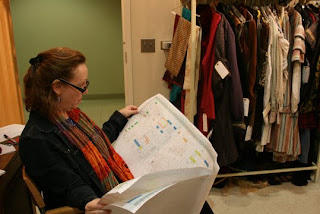 Above we see Jan consulting the now-famous “chart” that indicates which actors have to become which characters, and at what point, to make sure Jeff can get in and out of costume in time to get back on stage fully transformed. 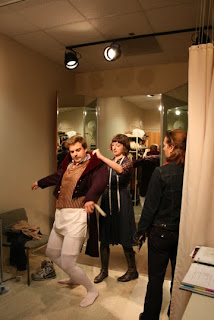 Another combination of jacket and vest to get it just right for this next character. 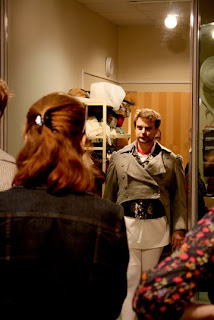 Hmm. This one doesn’t quite work either. 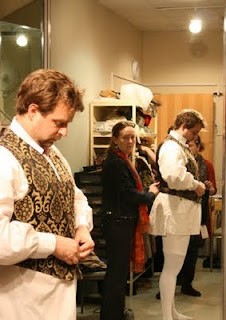 Another vest. Will this be the one? We’ll worry about pants another time. 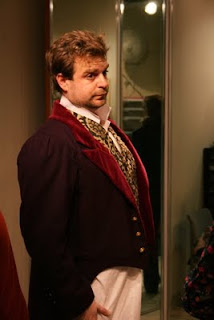 Aha – finally a combo that works! 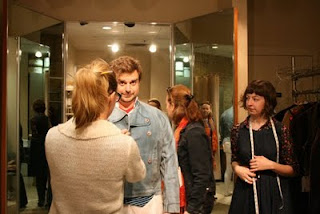 And now for young Wackford Squeers – the brat everyone loves to hate. Of course only blue velvet will do! 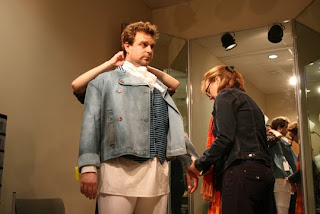 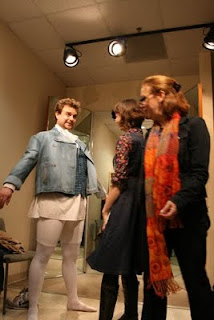 I think we’ve got it! 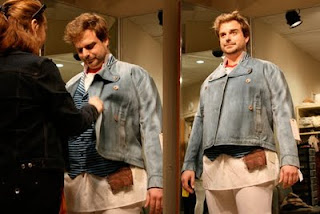 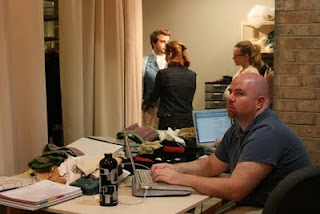 Not only does a fitting require the designers (Jan & Jade) and the costumer who makes all the adjustments (Kaitlin). Randy Handley, a third year costume graduate, who has served as assistant designer on numerous PRC shows, keeps track of important details in the Co-Star system about which pieces have been approved for which character, which alterations need to be made and which pieces are still needed.
In upcoming posts, hear from Jeff Meanza about what goes on “in the room,” more character analyses from dramaturg Anthony Fichera, and photos from a fitting with company member Jimmy Kieffer, recently seen as the dubious Wickham in Pride and Prejudice and the affable Karl in Opus. We’ll also have another piece from blog favorite, Rachel Pollock, as she returns to bonnet making in part two of her fascinating series “Bespoke Millinery.” Stay tuned!
View All Blog Posts