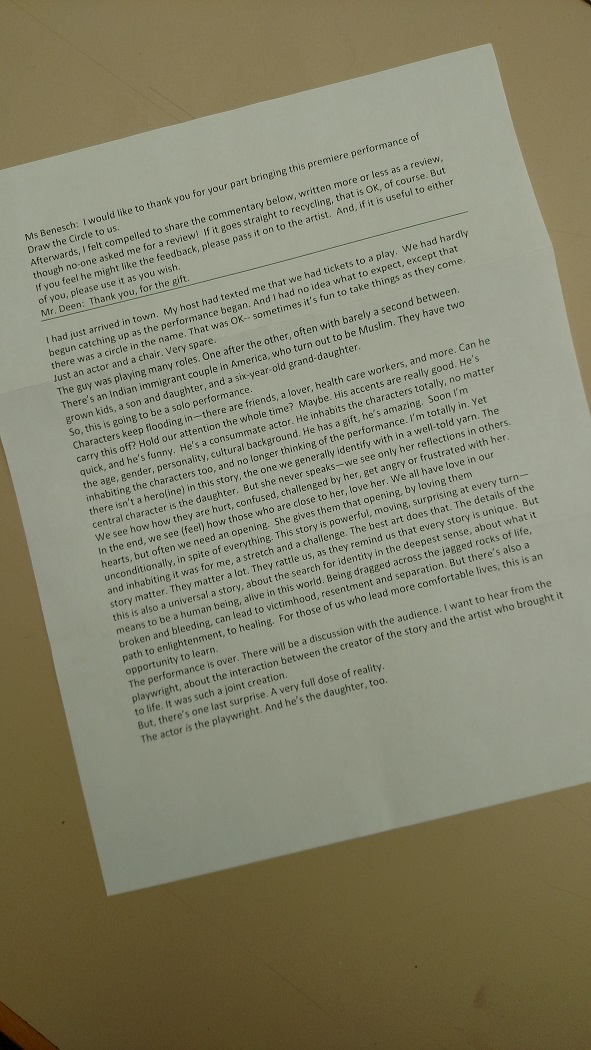 We wanted to share in particular an anonymous letter we received today. Thank you, whoever you are! You are not alone!

I had just arrived in town. My host had texted me that we had tickets to a play. We had hardly begun catchingup as the performance began. And I had no idea what to expect, except that there was a circle in the name. That was OK–sometimes it’s fun to take things as they come.

Just an actor and a chair. Very Spare.

The guy was playing many roles. One after the other, often with barely a second between.

There’s an Indian immigrant couple in America, who turn out to be Muslim. They have two grown kids, a son and daughter, and a six-year old grand-daughter.

So, this is going to be a solo performance.

Characters keep flooding in–there are friends, a lover, health care workers, and more. Can he carry this off? Hold our attention the whole time? Maybe. His accents are really good. He’s quick, and he’s funny. He’s a consummate actor. He inhabits the characters totally, no matter the age, gender, personality, cultural background. He has a gift, he’s amazing. Soon I’m inhabiting the characters too, and no longer thinking of the performance. I’m totally in. Yet there isn’t a hero(ine) in this story, the one we generally identify with in a well-told yarn. The central character is the daughter. But she never speaks–we see only her reflections in others. We see how they are hurt, confused, challenged by her, get angry or frustrated with her. In the end, we see (feel) how those who are close to her, love her. We all have love in our hearts, but often we need an opening. She gives them that opening, by loving them unconditionally, in spite of everything. This story is powerful, moving, surprising at every turn–and inhabiting it was for me, a stretch and a challenge. The best art does that. The details of the story matter. They matter a lot. They rattle us, as they remind us that every story is unique. But this is also a universal story, about the search for identity in the deepest sense, about what it means to be a human being, alive in this world. Being dragged across the jagged rocks of life, broken and bleeding, can lead to victimhood, resentment, and separation. But there’s also a path to enlightenment, to healing. For those of us who lead more comfortable lives, this is an opportunity to learn.

The performance is over. There will be a discussion with the audience. I want to hear from the playwright, about the interaction between the creator of the story and the artist who brough it to life. It was such a joint creation.

But there’s one last surprise. A very full dose of reality.

The actor is the playwright. And he’s the daughter, too.