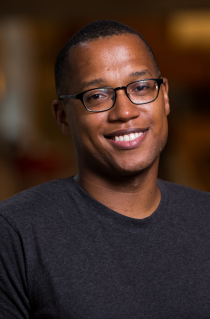 Branden Jacobs-Jenkins is a playwright drawing from a range of contemporary and historical theatrical genres to engage frankly with complicated issues around identity, family, class, and race. Many of Jacobs-Jenkins’s plays use a historical lens to satirize and comment on modern culture, particularly the ways in which race and class are negotiated in both private and public settings. Although the provocation of his audience is purposeful, Jacobs-Jenkins’s creation of unsettling, shocking, often confrontational moments is not gratuitous; these elements are of a piece with the world he has established on stage and in the service of the story he is telling.

Appropriate (2012) has all of the trappings of an “American family drama,” but the familiar plot of a family brought together after a father’s death is disrupted by the discovery of a collection of lynching photographs among the deceased’s belongings. In the characters’ varied responses, past and present racial relations become a palpable presence on stage, despite an entirely white cast. Neighbors (2010) includes performances reminiscent of historical minstrel acts performed by actors in blackface. These interludes lay bare the fraught expectations faced by black artists, a theme Jacobs-Jenkins returns to in An Octoroon (2014) with the meta-theatrical character of BJJ. BJJ is a playwright alter ego who guides the action of this imaginative recreation of Dion Boucicault’s nineteenth-century play of a similar name. Anachronistic acting styles, self-conscious references to the intrinsic artifice of theater, and jolting juxtapositions of the past and present demonstrate the enduring legacies of slavery and the ways in which people can live in close proximity and yet worlds apart.

With Gloria (2015), Jacobs-Jenkins returns to the naturalistic play, using the biting satire of the comic drama to explore the stratified, competitive world of the modern workplace and its sometimes fatal consequences. In these and other works, Jacobs-Jenkins’s subversive, fearless, and risky approach is challenging audiences to reconsider the integrated spaces we share and to reflect on opportunities for sympathetic connection.