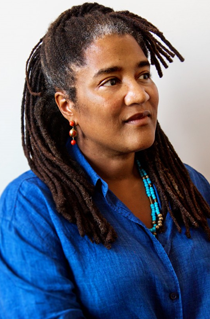 Lynn Nottage is a playwright and a screenwriter. She is the first, and remains the only, woman to have won the Pulitzer Prize for Drama twice. Her plays have been produced widely in the United States and throughout the world.

Nottage recently premiered “Floyd’s” at the Guthrie theater. She wrote the book for the world premiere musical adaptation of Sue Monk Kidd’s novel “The Secret Life of Bees,” with music by Duncan Sheik and lyrics by Susan Birkenhead. It premiered at the Atlantic Theatre Company in May 2019, directed by Sam Gold. Upcoming work includes an opera adaptation of her play “Intimate Apparel” composed by Ricky Ian Gordon, commissioned by The Met/Lincoln Center Theater. She is also writing the book for the musical “MJ,” featuring the music of Michael Jackson, premiering on Broadway soon.

Her play “Sweat” (Pulitzer Prize, Evening Standard Award, Obie Award, Susan Smith Blackburn Prize, Tony Nomination, Drama Desk Nomination) moved to Broadway after a sold-out run at The Public Theater. It premiered and was commissioned by the Oregon Shakespeare Festival American Revolutions History Cycle/Arena Stage. Inspired by her research on “Sweat,” Nottage developed “This Is Reading,” a performance installation based on two years of interviews at the Franklin Street, Reading Railroad Station in Reading, PA in July 2017.

She is the co-founder of the production company, Market Road Films, whose most recent projects include “The Notorious Mr. Bout” directed by Tony Gerber and Maxim Pozdorovkin (Premiere/Sundance 2014), “First to Fall” directed by Rachel Beth Anderson (Premiere/IDFA, 2013) and “Remote Control” (Premiere/Busan 2013 – New Currents Award). Over the years, she has developed original projects for HBO, Sidney Kimmel Entertainment, Showtime, This is That, and Harpo. She was a writer and producer on the Netflix series “She’s Gotta Have It,” directed by Spike Lee.

Nottage is a board member for BRIC Arts Media Bklyn, Donor Direct Action, Dramatist Play Service, Second Stage and the Dramatists Guild. She recently completed a three-year term as an Artist Trustee on the Board of the Sundance Institute. She is a member of the Dramatists Guild, WGAE, and the American Academy of Arts and Letters. She is currently an artist-in-residence at the Park Avenue Armory.