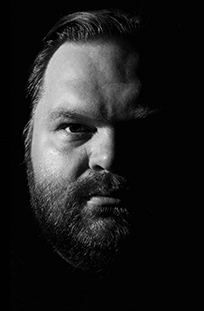 Hailed as “the master storyteller” and “one of the finest solo performers of his generation” by The New York Times, Mike Daisey is the preeminent monologist in the American theater today. He has been compared to a modern-day Mark Twain and a latter-day Orson Welles for his provocative monologues that combine the political and the personal, weaving secret histories with hilarity and heart.

This fall he performed a critically acclaimed 29-night live theatrical novel, All the Faces of the Moon, at the Public Theater in New York. At 29 continuous nights and forty hours in duration it is the longest sustained theatrical narrative work since the medieval mystery plays of the 13th century. This epic work has had over one hundred thousand downloads, and you can listen to this show and many of Mike’s other stories on his free podcast, All Stories Are Fiction.

As a playwright, his controversial work The Agony and the Ecstasy of Steve Jobs was downloaded over a hundred thousand times the first week it was made available. It has seen more than a hundred productions around the world and been translated into six languages. It has been adapted into a musical, restaged with shadow puppets, performed by 15-person ensembles of high school students, and produced from France to Kazakistan. The first Chinese production opened last year in Beijing, and is currently touring to Hong Kong, Shanghai, and Shenzhen.

Since his first monologue in 1997, Daisey has created over twenty monologues, including the groundbreaking The Last Cargo Cult, the incendiary How Theater Failed America, the Disney/Burning Man/Occupy mashup American Utopias, the prescient If You See Something Say Something, the twenty-four-hour feat All the Hours in the Day, the international sensation 21 Dog Years, and many, many more.

He has performed in venues across five continents, ranging from Off-Broadway at the Public Theater to remote islands in the South Pacific, from the Sydney Opera House to an abandoned theater in post-Communist Tajikistan. He’s been a guest on Real Time with Bill Maher, the Late Show with David Letterman, a longtime host and storyteller with The Moth, as well as a commentator and contributor to The New York Times, The Guardian, Harper’s Magazine, The Daily Beast, WIRED, Vanity Fair, Slate, Salon, NPR, and the BBC. In a brief, meteoric career with This American Life, his two shows are among the most listened to and downloaded episodes of that program’s eighteen-year history.

He is currently at work on his second book, Here at the End of Empire, which will be published in 2015 by Simon & Schuster. The first film for which he wrote the screenplay, Layover, was shown at the Cannes Film Festival in 2010. He has been nominated for the Outer Critics Circle Award, two Drama League Awards, and is the recipient of the Bay Area Critics Circle Award, five Seattle Times Footlight Awards, the Sloan Foundation’s Galileo Prize, and a MacDowell Fellowship.

Mike is active on Facebook and Twitter, and you can listen to his stories online through his podcast. You can find it all at his site, mikedaisey.com.