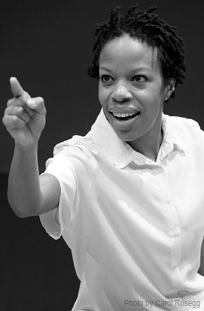 Nilaja Sun is the solo performer and writer of the Off-Broadway smash No Child…, which had its initial run at the Barrow Street Theatre from July 2006 to June 2007 and was recently revived there in an extended run. For her creation and performance of No Child… and its subsequent national tour, Nilaja garnered 21 awards including an Obie Award, a Lucille Lortel Award, two Outer Critics Circle Awards including the John Gassner Playwriting Award for Outstanding New American Play, a TheatreWorld Award, the Helen Hayes Award, and was named the Best One-Person Show at the U.S. Comedy Arts Festival in Aspen.

Nilaja’s New York credits also include Einstein’s Gift, Pieces of the Throne, Time and the Conways, Huck and Holden, The Cook, and The Adventures of Barrio Grrrl! She has also been seen on “Louie,” “30 Rock,” “Law & Order: SVU,” “Unforgettable,” “The International,” and on AMC’s “Rubicon.” In 2012, she was in the independent films Scoutmasters and Hairbrained.

As a solo performer, her projects include the critically acclaimed Blues for a Gray Sun (INTAR), La Nubia Latina, Black and Blue, Insufficient Fare, Due to the Tragic Events of…, and Mixtures. In 2010, Nilaja was awarded the soloNOVA Award for Artist of the Year by terraNOVA Collective. A native of the Lower East Side, she is a Princess Grace Award winner and has worked as a teaching artist in New York City since 1998.