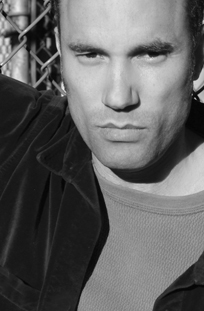 Roger Guenveur Smith adapted his Obie Award-winning solo performance of A Huey P. Newton Story into a Peabody Award-winning telefilm. His history-infused work also includes Frederick Douglass Now, Christopher Columbus 1992, The Watts Towers Project, Two Fires, Juan and John, Iceland, In Honor Of Jean-Michel Basquiat, Patriot Act, Who Killed Bob Marley?, and the ‘not-too-dark comedy’ Inside The Creole Mafia with Mark Broyard, cited by the Los Angeles Weekly as Production of the Year for both its premiere and revival runs.

Roger’s many screen credits include Do The Right Thing, for which he created the stuttering hero Smiley, as well as an eclectic range of characters in Malcolm X, Get On The Bus, He Got Game, Eve’s Bayou, All About The Benjamins, Hamlet, Deep Cover, and the recently acclaimed indie films Mooz-Lum and Better Mus’ Come as the Prime Minister of Jamaica.

He was nominated for the Screen Actors’ Guild Award for his work in American Gangster and starred in the HBO series K Street and Oz.

Roger studied at Yale University and Occidental College and has taught at both institutions, as well as Cal Arts, where he currently directs his Performing History Workshop. www.guenveur.com