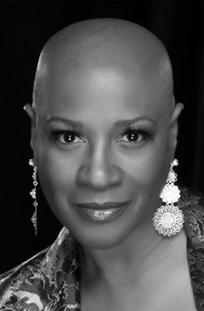 A New York native, singer/actress Rozlyn Sorrell relocated to North Carolina after a number of years performing in music, film, television and theatre in Los Angeles. She has performed or recorded with artists including Barbra Streisand, Whitney Houston, Al Jarreau, Norman Connors and others. Film and television appearances include Eyeborgs, Diplomatic Immunity, Nightmare on Elm Street III, “General Hospital” and “Matlock.” She is a frequent guest vocalist with the North Carolina Symphony and will have an encore performance with the Durham Symphony this December. She performed the role of Sharon, originated on the New York stage by Audra McDonald, in a production of Terrence McNally’s Master Class at Theatre in the Park. Rozlyn returned from three weeks’ study in Italy, having been awarded a fellowship for the Assisi Performing Arts Festival. Locally, Rozlyn operates Vocal Precision Studio, a private voice-training studio in Raleigh, while also accommodating expanded concert touring throughout the country.