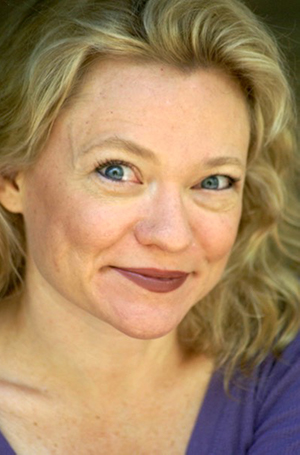 Serena Ebhardt is the co-founder of EbzB Productions (www.EbzB.org) An award-winning actress, Ms. Ebhardt has performed in Europe, Canada, OffBroadway, on national tours, upon regional stages and in television and film. Her production of WAR BONDS: THE SONGS AND LETTERS OF WORLD WORLD II, which she co-wrote and performs, is featured on public broadcasting stations
across the United States.

Her professional performance career began at the age of six, and has grown to include many other aspects of the art including writing, teaching, producing, theatre administration and directing. Serena’s directing work is influenced by the theories of Overlie’s Viewpoints and Gardner’s Multiple Intelligences. In 1994, Serena wrote, produced and directed BROWN V. BOARD OF EDUCATION, a one-man show featuring Mike Wiley. The two artists found similar philosophies and working styles which lead to partnerships on a multitude of projects including DAR HE: THE STORY OF EMMETT TILL, TUSKEGEE, BLOOD DONE SIGN MY NAME and LIFE IS SO GOOD. Serena is a Paul Green Scholar with a B.A. in Dramatic Art from UNC-Chapel Hill. Her training includes Master Classes at Hedgerow Theatre and The John F. Kennedy Center for the Performing Arts: Artists as Educators. She is a member of Actors’ Equity Association and Canadian Actors’ Equity Association.