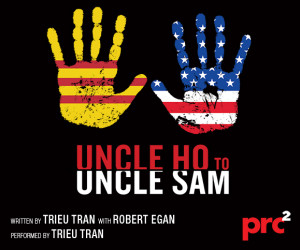 In this season’s PRC2 opener, Uncle Ho to Uncle Sam, creator/performer Trieu Tran shares an intense autobiographical journey. How did he and collaborator/director Robert Egan turn his true story into a riveting theatrical performance?
“Robert and I were doing a play together in New York about the aftermath of the Viet Nam War on a group of American veterans. I played a character who was a memory figure from a GI’s time in Viet Nam. Robert was my director on that play. We used to spend most of our break time together talking about sports and Los Angeles and, of course, the Viet Nam War. I have a very personal history in relation to that war and so does Robert. I lost family and friends and a country. Robert lost friends and parts of his country. Robert and I talked long and hard and in a most complicated way about both of our experiences. He suggested I had a real story to tell.

“We went back to LA and had a 6-hour lunch where I told him much of my story. A play was born that day. We began a writing process where Robert essentially sent me topics/prompts/feelings to write about, riff about, meditate about. I wrote fully and wildly and emotionally. Robert would shape the material and send it back to me.

“We found we were writing as one, in my voice, in my sound. It was thrilling. We did this for months. We amassed about 300 pages of writing and responses. And then Robert and I kept shaping and pounding out the dramatic sculpture that is now Uncle Ho to Uncle Sam. So I guess Robert got me to believe that a play was worthy and possible. 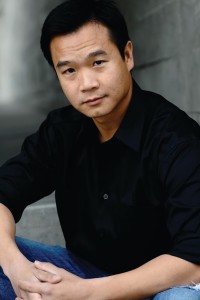 “The deep inspiration for the play was what happened to my father, my mother, my family and me as a result of losing our country and trying desperately to find our identity and soul in a series of new worlds.

“Essentially this is the story of my journey to America from Viet Nam in the immediate aftermath of the war there. Then it is my journey through refugee camps, Canada and the United States in an attempt for my family and me to find a home that is free and fair. It’s also a family drama about my father’s attempt to adjust to a world where he had lost a country; my mother’s attempts to raise a family with love and safety in foreign lands; and my attempts to find wholeness and love and a voice in a new world.”