When audiences enter the theater to see The Parchman Hour, their eyes will probably go straight to the life-sized bus onstage. 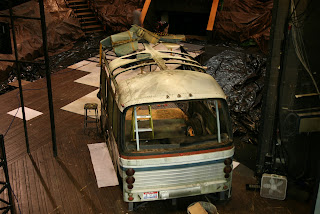 “The bus became the real tag for me as so much of this story and the story of the civil rights movement involves buses,” says set designer McKay Coble, citing the story of Rosa Parks, the strategy of the Freedom Riders and the bus-burning incident at Anniston as examples. But there’s more to the set than the bus.

Coble also says she incorporated T.V. sets into the design to highlight the discrepancy between the “lighthearted and a little sexy” vsion of “a bright new world” broadcast on television and the grim problems actually occurring in the ’60s.
wikti
“We are using a clip of a Greyhound commercial (and it is one of many travel logs) that show a journey that was supposed to be representative of the trips folks took on buses in 1961,” Coble says. “I think the photos of the Greyhounds we see used for the Freedom rides – particularly the one at Anniston – tell a very different story.” 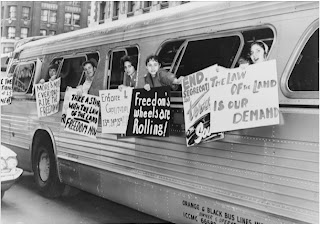 As many television sets were still in black and white in 1961, Coble set the majority of the play in the color scheme. “The play starts out in color and we lose it once we get to the prison,” she says, citing the achromatic prison uniforms seen in Parchman and the mug shots of the Freedom Riders as examples of the black and white design elements.

Coble says that the return of color at the end reminds audiences “that the movement was forward – still with a way to go, though.” The use of color was also inspired by the artwork of Charlotta Janssen, whose work Coble discovering when researching the world of the play.

“She has created remarkable collage and painted portraits based on the mug shots of the Riders that have become so iconographic,” Coble says. “It is rich and deep and passionate- makes complete sense to me.”