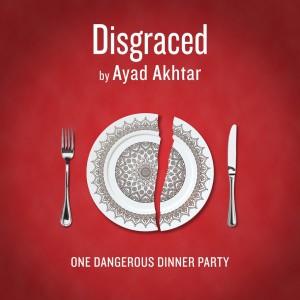 “I wanted to direct Disgraced for a number of reasons, one being that it doesn’t shy away from the challenging and provocative questions of co-existence in the United States with its celebration of diversity and requisite fall out of that hybridity; namely a culture where people feel like they belong everywhere while also feeling like they belong nowhere.

“Disgraced examines what it means to be part of a culture that considers itself a free society as it pulls back the curtain on the nascent racial and cultural differences that create barriers and inequities that burble just beneath the surface of the American psyche. It looks at the clash of cultures and the misunderstandings that occur in a society that touts the notion of tolerance, and even acceptance, while also struggling to have an authentic experience of the “other,” who are constantly vying for recognition and belonging in the greater mainstream of this society.

“I admire Ayad Akhtar’s play because it dares to show a much maligned religion and culture, warts and all. It doesn’t cater to the, “there-are-so-few-stories-about-this-subject-and-our-people-so-why-not-put-our-best-face-forward” crowd. Instead, it airs the dirty laundry of Faith while being critical of false and easy liberalism; the kind that wants to see only the good that religion does, but because of ignorance of the specifics and interpretations of the Faith, acquiesces to its pitfalls. And because the ensuing championing and critique comes from unexpected sources, the audience is always having to make an assessment of what they feel even in, most likely, their own ignorance of the contents of this particular Holy Book.

“That kind of courage is what makes the work heroic, because the critical voice emerges from within the fold. The willingness to be excoriating about the pitfalls, while also finding voice for the beauty of it—and here the author puts the beauty to test as well—and we’re left at the end with a feeling that doesn’t wrap anything tidily in a bow. And that is as it should be. After all, it’s in keeping with the likes of Miller and Ibsen in always turning the soil in order to root out the rot.

“As new cultures come up to bat in presenting their “American Dream Experience” all one need keep in mind is that telling the truth as you have come to experience it should be the unerring maxim of your art.”

Join us when Disgraced opens the Mainstage Season Sept 16-Oct 4.: