PlayMakers is honored to host award-winning costume designer Sonya Berlovitz as she puts together the threads for our world premiere adaptation of Moliere’s Imaginary Invalid, opening this weekend at the Paul Green Theatre, Department of Dramatic Art, UNC-Chapel Hill. Here’s what she had to say about giving this classic farce a new sartorial spin: 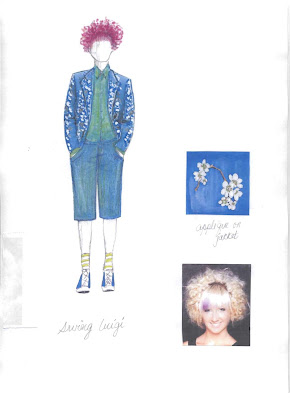 I was very excited to work on PlayMakers’ production of Imaginary Invalid – it being a Moliere play that I have always wanted to design. It is very exciting to prepare for a world premiere because there is a lot of freedom to conceive designs in an unexpected way since it is a completely new venture for the entire artistic team, and since everyone is on the same page you have the strength of the collaboration to support your efforts.

After some discussion with Dominique Serrand, the director, we wanted the show to be very contemporary (i.e. 2012), which actually is more difficult than it sounds. We wanted characters that were real, not cartoony, who could be both funny and potentially a little frightening. 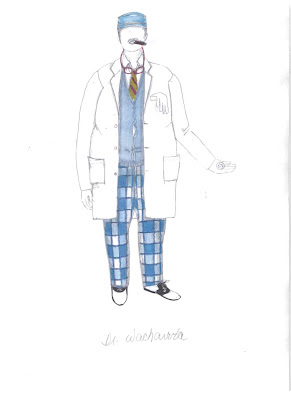 The script provided valuable information in terms of the world we were in, both funny and tragic. I did some background research into the traditional design of the show to see how we could contemporize it.  I also looked at current fashion and medical and surgical professionals from today, as well as the red carpet for Klytemenestra, an egoistic character always on the move. For example, how Argo would look in a sickroom today or how a nurse and a bucket boy (characters not in the original version) hired by a wealthy person would appear. It meant details that said “2012” became important; see the silicone bracelets for the nurse. To poke fun at the pomposity of Dr. St. Judas and Dr. Wachauvia, I gave them matching Ivy League collegiate ties and lab coats, Wachauvia still in his golf clothes.