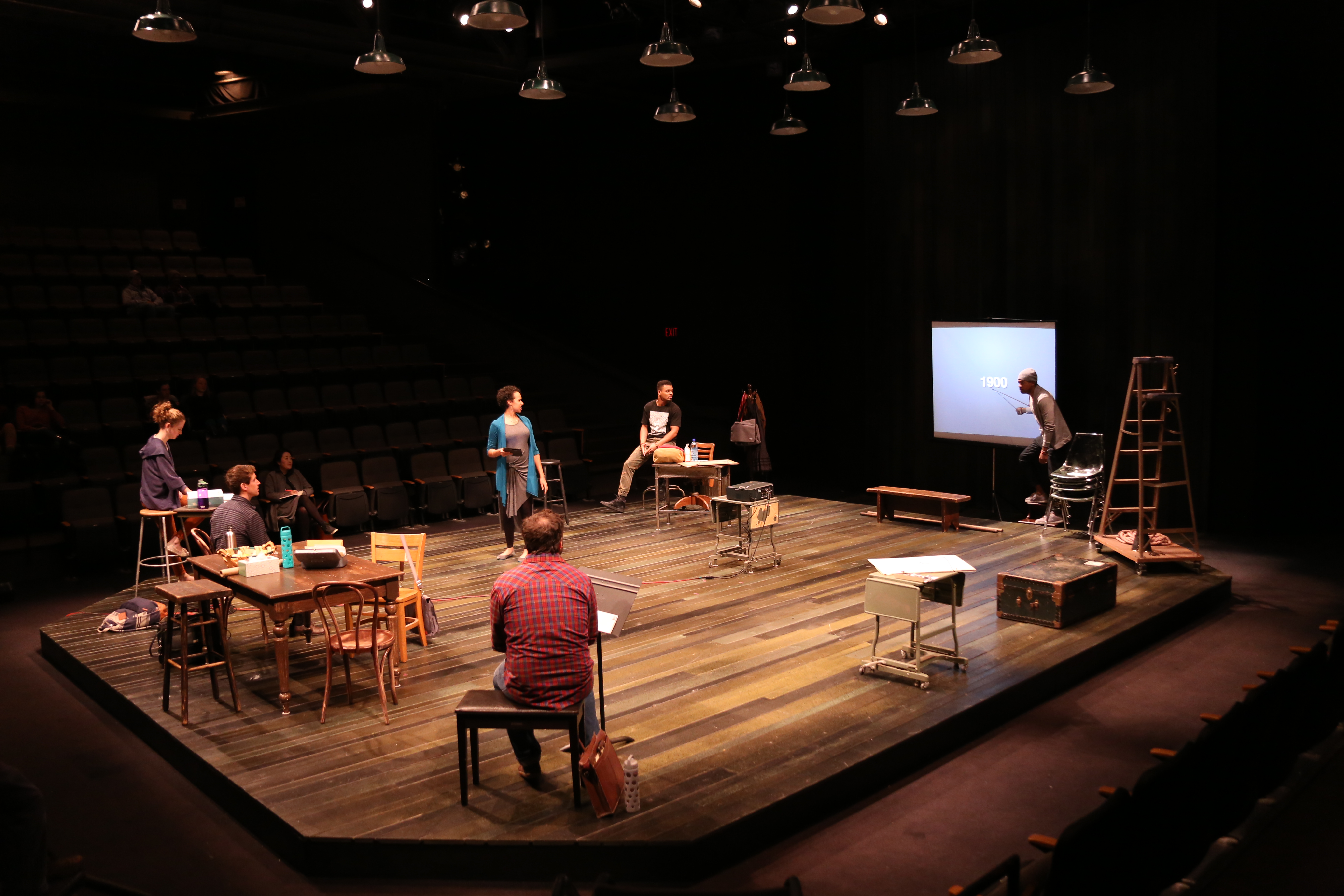 Cast of We Are Proud to Present… Photo by Curtis Brown

The process of creating the projection design for We Are Proud to Present… differed from many projection design processes, because it evolved into a dramaturgical character study, less focused on the resulting visual. The video presentation is an element created by the characters in the play, and in this way, it is almost more like a prop than an ephemeral design element. In order to support this kind of storytelling, the projected images need to look as if they were created by the characters onstage, rather than by a team of trained theatrical designers. 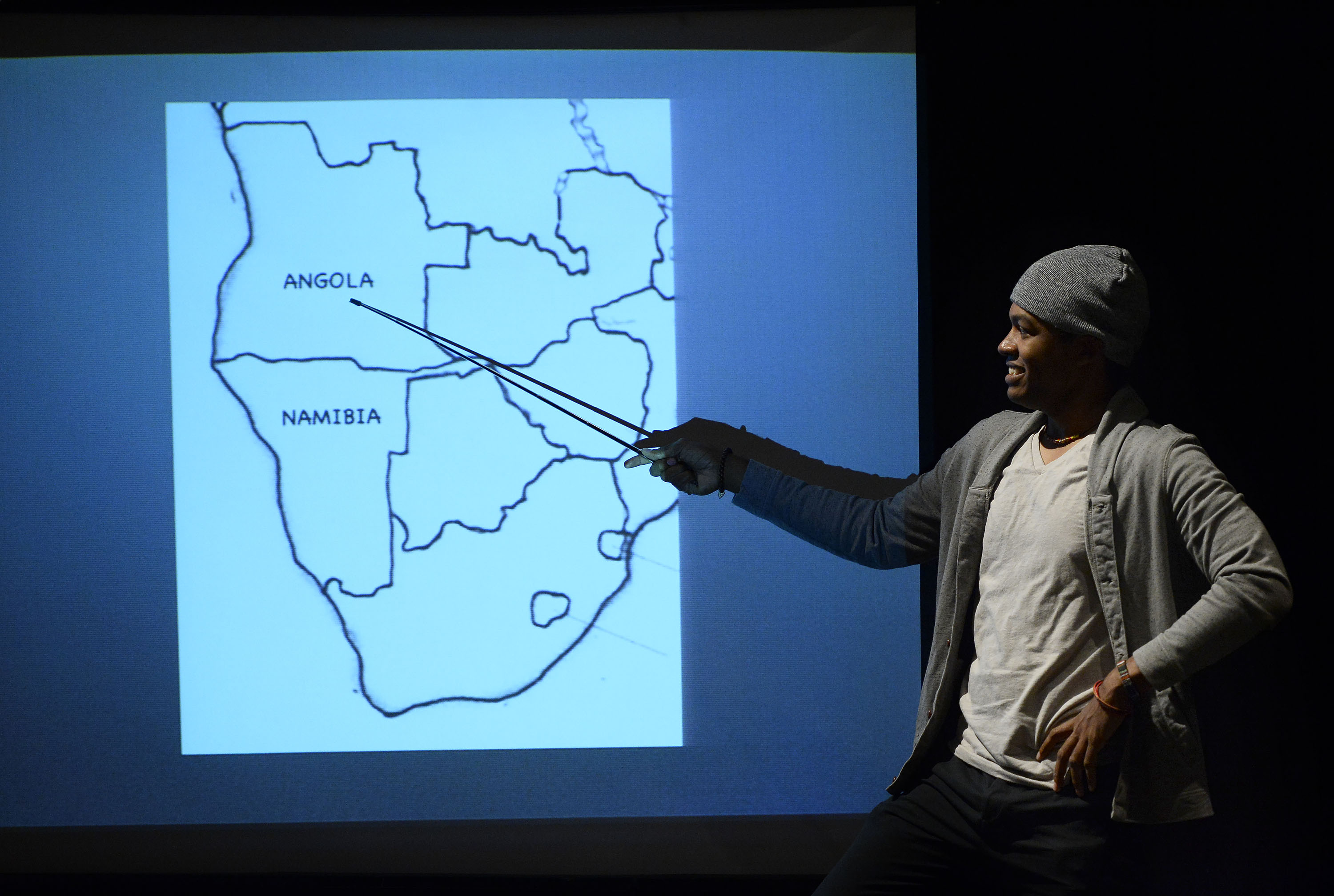 Rather than creating the most beautiful, technologically advanced presentation, we looked at the resources the characters in this play would have had at their disposal, and what they would be using to create their presentation. When we first discussed the design of these moments, we had lots of analog ideas – a carousel slideshow, an overhead projector with write-on transparencies and such. After more discussion, however, we realized that these characters actually wouldn’t have access to this technology. We began discussing how technologically literate our characters were. Do they own smartphones? How much time per day would they spend on their phones, and on social media? How often are they on the internet? When they were in college, how did they make presentations? Did they use posters or PowerPoint presentations? Did they make notes for themselves on 3×5 index cards or use their phones? I looked to my own experience teaching college students, and how they create presentations when called upon to speak in front of the class.

From that conversation, we set up rules – the presentation we see at the top of show was created in Keynote, versus using a theatrical cueing system, because these characters are likely to be familiar with Keynote software. I only used images I felt the characters could have found and would have been interested in. I only edited those images with the tools within the Keynote software, as opposed to using software like Photoshop, which would likely be cost preventative to our characters. When you see the projections within their lecture, you’ll see some technical issues and typos. We feel this replicates most realistically what these characters might have actually put onstage if they were creating it for themselves. 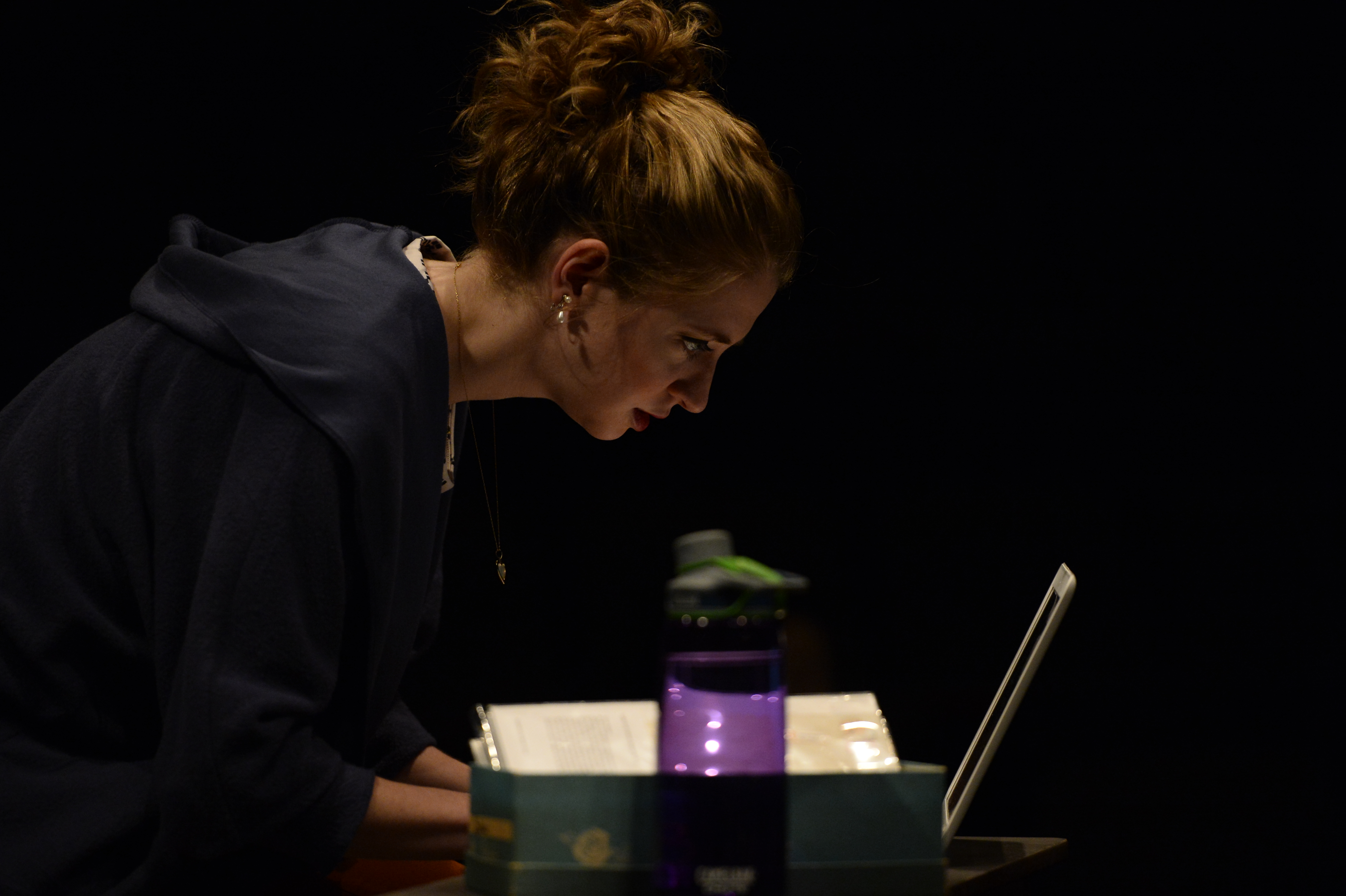 In this same vein, we have eliminated conventional cueing structure from this design. Just as if these characters were putting on this lecture in real life, they have a laptop on stage, and they are actually operating the presentation that we see. When you walk into the space, you will see a bright orange power cable running to the projector – this is the actual power cable for the projector – not a prop. You won’t see the actors miming typing, because they are actually typing on the computer, and they are actually manipulating the presentation we see onstage. This introduces a less-controllable element into the performance, in that the crew backstage isn’t operating the equipment and has no control over the content we see onstage. This adds a level of reality that helps us to feel the characters owning their space, and this feeling of their ownership, control and confidence becomes important to the story as it progresses.

Experience this one of a kind performance. We Are Proud to Present… is onstage through March 13.
Click here for tickets, or call our Box Office today at 919.962.7529.