What was the inspiration for the haunting set design for A Number, the first PRC² production of the season? Costume and set designer Jan Chambers reveals that her design process began upon discovering the backstory actor Ray Dooley created for his character.

After learning that Dooley decided that his character’s emotional problems arose from a traumatic experience in Vietnam, Chambers happened to encounter a painting that she said spoke to her of the character’s “haunted stated of mind.” 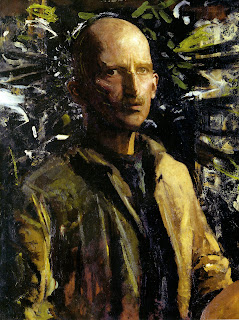 “The resemblance to Ray is uncanny, and the painting emotionally cemented his character for both of us,” Chambers said. “The play, of course, takes place some 35-40 years after that moment, but his past and present state of mind definitely played a part in the design of the space – a small, confined, claustropobic world where something massive is slowly closing in.”

Chambers incorporated that tension into the space. She said of her design, “Skewing the angles of the room and pulling the space into the audience’s lap further helped create a visceral environment that played as a counterpoint to the measured and suppressed dialogue of denial and avoidance.”

A Number is now playing through Sunday, September 11. Click here for more details.