Much has been made of the sheer scale of costuming a production this size–if you’ve been following the blog you know that not only are we making many costumes in-house, but have also pulled a lot from our own stock, borrowed them from partner theatres and drama departments in the state university system, and rented them from theatres and rental houses all over the country, from New York to Milwaukee to Seattle.

For the costumes we’re making, our designers have the most aesthetic control over how they will ultimately appear onstage–they have chosen the fabric and trims, indicated where they want seams to fall or how big sleeves will be, sometimes even picked a color for them to be dyed. These costumes are custom made to fit the performers’ exact measurements by our highly-skilled drapers and tailors using couture techniques. We are all absolutely certain that they will be exactly what the designers and directors want them to be!

When we pull costumes from our own stock, we still have a fair amount of control over what they will look like. PlayMakers owns them, so if our designers want them dyed a new color, or beat up to look raggedy for a poor character, or the sleeves removed and remade in a different fabric, fine! We can do all of that (and, have). The alterations we make on our own pre-existing costumes can happen without a thought to how the costume might be irrevocably changing.

For the costumes we have borrowed or rented, though, that’s a whole different animal. We don’t own them, and what we can and cannot do to them is limited by the rental agreements we have with the companies who do. We cannot dye them or paint on them or age them to look more worn or ragged. Anything we remove from them (like trims or ruffles that our designers don’t care for) must be reapplied before we return them. Even alterations to fit our performers are a dicey prospect; generally, if you let a costume out to be larger, that’s ok, but if you take it in to be smaller, you need to restore it to its original size before returning it! That’s more difficult than you might think, since that means no bulk in a taken-in seam can be cut away, and if you raise a hem by several inches to fit a shorter-statured actor, you have to hide all that extra fabric inside. In our Costume Production MFA program, we teach our students that the general rule-of-thumb with rental costumes is, you send it back the same or better than you received it. It’s not just professional courtesy; it’s also just good business–if you don’t restore your rentals, your company is fined a restoration fee, or even asked to pay for its replacement if the costume is severely damaged while in your possession.

For me, as the show’s milliner, this has meant i need to keep careful records tracking how all the hats we have borrowed might be changing for the production. Many of them are definitely going to go back in better condition than we received them. Hats are often stored in boxes and baskets by rental companies and women’s hats in particular often arrive dented or a bit “squished.” My assistant, Candy McClernan, and I have been steaming and resizing them to freshen them up and make them more crisp and new-looking, and putting in pretty linings and interior grosgrain ribbons. Most hats for stage don’t get lined, usually due to a combination of not having enough time to do so, and because no audience member will see the inside–if you have to make a sacrifice when pressed for time, leaving a hat unlined is a common choice for theatrical milliners. For this show though, since everyone changes characters multiple times–sometimes in a matter of seconds, potentially in full view of the audience–I am assuming that every hat needs to be able to go on and off onstage, and thus needs a lining. We started lining borrowed and pulled hats back in August!

Often our costume designers will request that hats be retrimmed to match dresses–Candy and i remove extant ribbons and flowers, bag them with a rental number tag so we can put them back on the proper hat when the show’s over, and store them in a drawer set aside for the purpose. For the new trims we are adding, we use a method that allows our designers and directors the most freedom in terms of potential aesthetic decisions, while at the same time making sure the borrowed and rented hats are treated with utmost care. Ladies hats in this time have TONS of trim–flowers, feathers, ribbons, bows, even little stuffed birds!–so rather than sewing all our new trims directly to the rented hats themselves, we make what’s called a garniture base, a small covered piece of buckram material that blends with the fabric of the hat. The trimmings get sewn to the garniture base, which then gets tacked onto the hat–in this way, we minimize the amount of wear-and-tear that the rented hats take (since they only take a couple of tacks holding on the base, rather than bunches of sturdy stitches securing lots individual pieces of trim) and we make it easy to reverse our work at the end. Once the shows close,we just have to clip the small tacks, remove the garniture base, and then put the original trims back on. Then our designers and managers can return them back to their original homes in costume storage facilities across the state and the nation, having had their moment in the footlights as part of this historic production, ready to serve future designers and performers for theatre yet to be made! 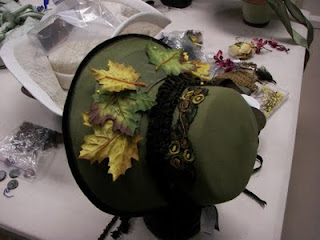 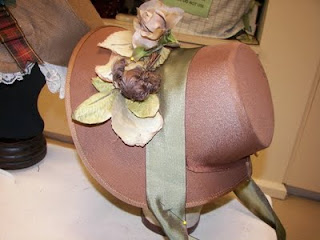 Can you spot the garniture base on this bonnet (borrowed from UNC-Greensboro) for a Street Person? 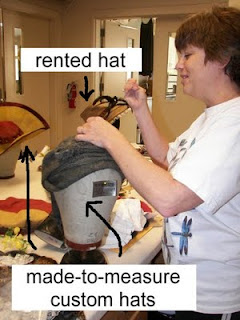