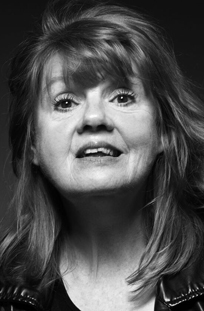 Annie considers herself the illegitimate child of the legitimate theatre, having been discovered on New York’s Bowery fronting a rock band and cast by Milos Forman as Jeannie in the 1978 film Hair. Some of her Broadway credits include Violet, Xanadu, Leader of the Pack, On the Town, The Full Monty and Ah! Wilderness. Annie was also Stephen Sondheim’s original Squeaky Fromme in Assassins (Playwrights Horizons, world premiere). Notable among numerous Film/TV credits is her current role as Norma Romano in the hit series Orange Is the New Black for Lionsgate/Netflix, for which she won a Screen Actors Guild Award (Outstanding Performance by an Ensemble). She has appeared in films from Desperately Seeking Susan and Longtime Companion to Baby Boom and Twelve Monkeys, and TV shows from Miami Vice and Cheers to Law & Order and Law & Order: SVU.