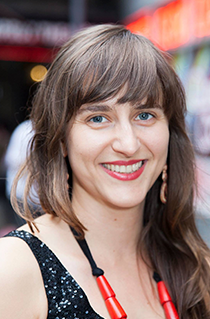 Tara Elliott is the director of critically-acclaimed shows Burq Off! and Not the One, and producer of the Gotham Award-winning web series Shugs & Fats, now in development with Amazon Studios. She translated and directed the English language workshop premiere of prize-winning Chilean play Las Analfabetas. She is the recipient of a Tow Travel Grant for research in Cuba, a CUNY Diversity Projects Development Fund Grant, and has developed new plays with Pipeline Theater Company, LaMicro Theater, Teatro LATEA, BAX, Goethe Institut, Exquisite Corpse Company, KOFest, and The Barn Arts Collective. Her work has been seen internationally in London, Seoul, Luxembourg, Edinburgh, and Toronto, and in NYC at The Public, The Cherry Lane, HERE Arts, Walkerspace and Dixon Place, among others. 2018 Drama League Directing Fellow. MFA Directing from Brooklyn College.