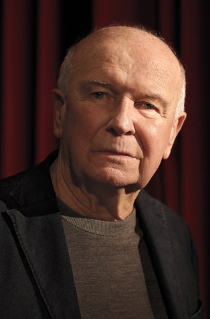 Terrance McNally has been described as “a probing and enduring dramatist” and “one of the greatest contemporary playwrights the theater world has yet produced.” He has received the Tony Award for Best Play for Love! Valour! Compassion! and Master Class, as well as the Tony Award for Best Book of a Musical for Kiss of the Spider Woman and Ragtime. He is a 2018 inductee of the American Academy of Arts and Letters. The honor of election is considered the highest form of recognition of artistic merit in the United States. His other accolades include an Emmy Award, two Guggenheim Fellowships, a Rockefeller Grant, four Drama Desk Awards, two Lucille Lortel Awards, two Obie Awards, and three Hull-Warriner Awards. He is a recipient of the Dramatists Guild Lifetime Achievement Award as well as the Lucille Lortel Lifetime Achievement Award. In 2016, the Lotos Club honored McNally at their annual “State Dinner,” which has previously honored such luminaries as W. S. Gilbert and Arthur Sullivan, George M. Cohan, Moss Hart, Richard Rodgers and Oscar Hammerstein, Saul Bellow, and Arthur Miller. In addition to his award-winning plays and musicals, he also written two operas, multiple screenplays, teleplays, and a memoir.

He has been a member of the Council of the Dramatists Guild since 1970 and served as vice-president from 1981 to 2001, and was inducted into the American Theater Hall of Fame in 1996. In 1998, McNally was awarded an honorary degree from the Juilliard School in recognition of his efforts to revive the Lila Acheson Wallace American Playwrights Program with fellow playwright John Guare. In 2013, he returned to his alma mater, Columbia University, where he was the keynote speaker for the graduating class of 2013 on Class Day.

His career has spanned six decades, and his plays, musicals, and operas are routinely performed all over the world. The diversity and range of his work is remarkable, as McNally has resisted identification with any particular cultural scene. Simultaneously active in the regional and off-Broadway theatre movements as well as on Broadway, he is one of the few playwrights of his generation to have successfully passed from the avant-garde to mainstream acclaim. His work centers on the difficulties of and urgent need for human connection. For McNally, the most important function of theatre is to create community and bridge rifts opened between people by differences in religion, race, gender, and particularly sexual orientation.

In an address to members of the League of American Theatres and Producers he remarked, “I think theatre teaches us who we are, what our society is, where we are going. I don’t think theatre can solve the problems of a society, nor should it be expected to … Plays don’t do that. People do. [But plays can] provide a forum for the ideas and feelings that can lead a society to decide to heal and change itself.”