“I’m not a lover of clothes, necessarily, but I really love telling stories,” says Melanie Burgess, the guest costume designer for Blues for an Alabama Sky, a production filled to the brim with beautiful, thoughtfully chosen costumes to complement a truly vibrant cast of characters. But the process of clothing the cast was not as simple as just picking clothes off a rack.

Burgess has designed costumes for over 170 productions across the United States and has received multiple awards for her work. Her process for each new piece starts with reading the play and delving into the world the playwright has crafted way before the actors start rehearsals.

Set in Harlem in 1930, the country is on the brink of the Great Depression. The show begins with Angel and Guy, two friends who have just lost their jobs, but times have not yet become too dire and the city still rings with the voices of the Harlem Renaissance. Burgess explains that for her, “it’s all about the story. It’s all about who these people are, it’s about diving in and getting in there.”

It is especially important for costume designers to use historical references when working on shows such as Blues for an Alabama Sky. This includes hours of combing through historical texts for inspiration and cross-referencing ideas against both the play and the time period is necessary to create the initial sketches.

In her research, Burgess had to look beyond the information that was readily available. “There are not a lot of books published that are going to show what African Americans wore in particular occupations.” Many of the clothing trends of the time for people of color are significantly less documented than other groups, because marketing at the time was largely done for a white audience and racism ensured the destruction of many of the documents that were made.

“The Cotton Club, for example, was for white patrons and Black performers and entertainers. Although you can get [images of] famous people like Josephine Baker and Cab Calloway and others that we know of, to really get a sense, for instance, of a background singer is much harder,” Burgess explained. “There is a lot of extrapolations on my part when it really gets down to the details of what these characters actually are doing in the context of this play.”

Guy, performed by company member Jamar Jones, is a great example of this. He is a talented costume designer with his eye set on working for Josephine Baker, a renowned singer, dancer, and actress, in Paris one day. As a gay man in the early 1900s, there is not much documentation on what he might have worn. To dress his character, Burgess pulls from what historical documentation she can about the fashion trends of the time and combines it with a contemporary idea of what a gay costume designer might wear. 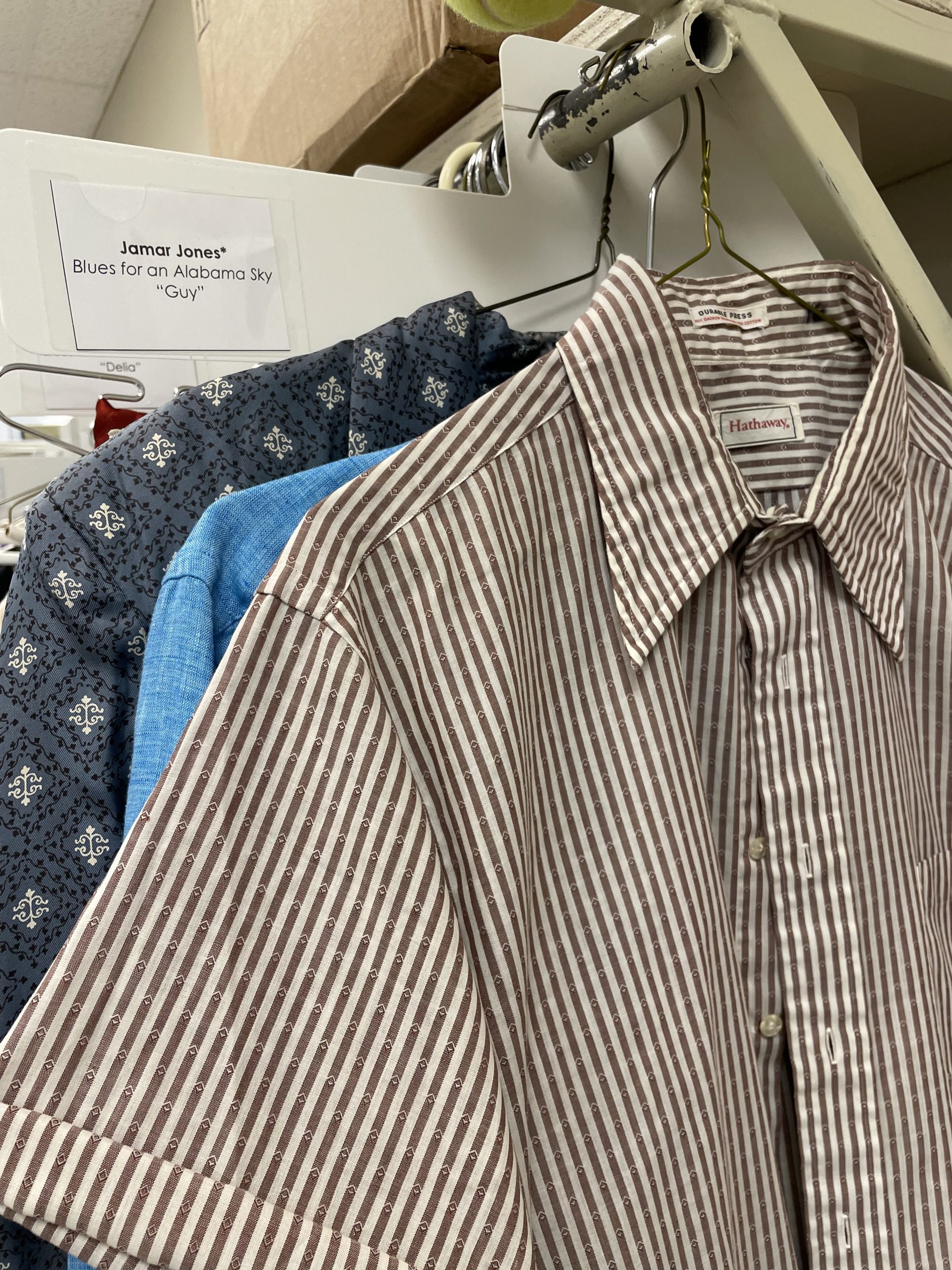 “There is a real balance to be made with Guy. The details are what matters even if those clothes are sort of normal looking clothes,” Burgess said. “He’s not going to be that [modern idea] of what comes to mind when we hear the word flamboyant,” but Burgess explains that Guy’s personality might come out in more meticulous, signature ways.

“He’s going to wear short sleeve shirts and roll them up,” Burgess explained. “He’s going to [create a look] that’s really pristine every time he goes out.”

Guy’s outfits play around with colors and social conventions, as well. He wears a total of five different hats throughout the play that elevate his overall look. “Like a shoe lover, he’s a hat lover. It really feels like he’s trying to be very dapper about the way that he’s going out in the world.”

Color choice comes into play with his shirts. Burgess designed most of his outfits around colorful shirts and patterns. For each outfit, there is always a different color; she doesn’t put him in a classic white shirt except for a tux shirt. “That’s the kind of augmentation, the liberty I take to be able to really emphasize the characteristics about him that are maybe perhaps moving outside the bounds of the period.”

If you keep an eye on the clothes as the story progresses, you will see that the colors come and go as the characters themselves are dealing with struggles or celebrating a success in life. “We try to tell a story through the arc of the costumes that is in parallel to the arc of the characters,” Burgess added.

Clothes are a reflection of our personalities, our desires, and at times even our hopes and dreams. The ones worn in Blues for an Alabama Sky are no different. There is beauty in the normalcy of the costumes on stage and a story waiting for those who look close enough at them.

Join us at PlayMakers for a magnetic and heartfelt production.Blues for an Alabama Sky on stage Sept 7–Sept 25, 2022. Get your tickets today!