As PlayMakers’ resident crafts artisan, in addition to all the millinery, another of my responsibilities is to function as the company dyer, assisting the costume designer in careful control of the color palette of the show by making adjustments in fabric hues.

Because we share space with the facilities for UNC’s nationally-known Costume Production MFA program, I have access to a state-of-the-art theatrical dye shop which features a full range of four different classes of dyes and related auxilliary chemicals, two industrial dye vats with fume exhausts, a yardage steamer (called the “silver bullet,” no relation to Coors!), and both dye mixing and spray boxes. I have worked in a lot of costume shops, from LORT theatres to Broadway to international opera and ballet, and I have to admit–the dyeshop facilities here really impressed me when I interviewed for the job. It’s so rare for a regional theatre like PlayMakers to have these kinds of options when it comes to equipment and supplies for surface design of fabrics and costumes. (And, it’s such an exciting luxury for me, to have these resources at my disposal when it comes to doing my job!) 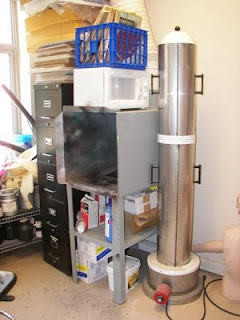 Silver bullet–we can steam-set a whole bolt of dyed fabric in this!

The average PRC show involves around 25 custom dye jobs–from dyeing fabric yardage before it is made into costumes, to matching a trim or lining to a chosen fabric, to turning a finished garment a whole new color. (For the curious, the current record-holder for number of dye jobs for a single show is 2008’s Pericles with 63! Second place goes to Glass Menagerie with 47, closely followed by Amadeus with 45 and Toni Morrison’s The Bluest Eye with 43.) So far, Nickleby is right on track with 25 completed so far, and nearly a month to go til opening. If we had an office pool running on it, I’d bet on a total of 75 by the time we open, with a lot of those coming in after we start seeing things onstage. Sometimes a costume designer needs to see everything together with the set and props under the lights to realize that, hey, that guy’s pants are really bright compared to everybody else up there… 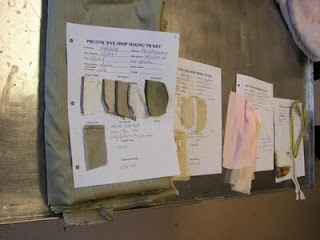 Here are some examples of the dye requests for Nicholas Nickleby which have been processed so far:

– an industrial metal zipper for the back of a quick-change dress, dyed half one color and half another to better blend into different skirt and bodice fabrics

For each dye request, I keep accurate records on the precise process developed–what type of dye and auxilliaries used to dye what fiber fabric, how much and for whom, how quickly it’s needed. Sometimes I have a week or two to turn it around (like in the case of the two-tone zipper, which will go into the costume toward the very end of its construction) and sometimes I only have a few hours (such as collar fabric that needs to be cut and sewn onto a shirt in time for a fitting that afternoon).

All this dyeing has to feed into my workload for making the hats and altering shoes and various other accessories as well–it’s a time-management juggling feat, that’s for sure! 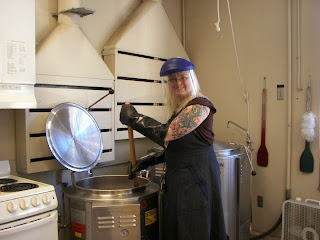