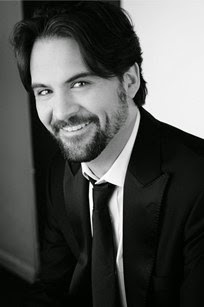 In Mary’s Wedding by Stephen Massicotte, two actors come together to create a dream sequence taking us through horse rides, battle scenes and tea parties that ultimately lead to the blossoming of their love. The character Charlie first addresses the audience and makes it perfectly clear that the events to follow are part of a dream. “I ask you to remember that,” he says. Director Cody Nickell says the dreamlike setting allows the production to break all rules of time, space, and at times, even character.

Cody had many difficult questions to answer at the start of the production process. The dream moves from place to place quickly, leaving complicated theatrical elements for Cody to consider. While some may see these questions as challenges, Cody chooses to see them as gifts.

“How do you bring to life a horse for a cavalry charge when there is no horse? How do you show a moonlit battle between trenches on the front lines of World War I with only two actors? And maybe most interesting, for all its theatricality, how do you show the simple story at the heart of this play about two young people falling in love?”

While the staging can be difficult, the underlying story of Mary’s Wedding is much simpler. It follows the relationship of two young people in love and the Great War that comes between them. To escape a thunderstorm, Charlie, played by Myles Bullock, and Mary, played by Carey Cox, seek shelter in an old barn. In this setting, their vulnerabilities are exposed and we see sparks of love develop between them almost immediately. The audience follows their budding romance, and ultimately, their separation when Charlie is taken off to war.

“It begins at the end and ends at the beginning. There are sad parts. Don’t let that stop you from dreaming it too. ” – Charlie, in his first monologue from Mary’s Wedding.

The many imaginative gifts the production staff conjures will awaken the imaginations of audience members as well. “This engagement of audience imagination makes the experience active for them, not passive; they become witnesses, not just observers,” says Cody. The actors are on a journey, but they invite the audience along to experience the terror and the hope that Charlie and Mary encounter.
Jeff Adelberg‘s mystic skyscapes and lighting will be a key factor in the quickly changing time, place and mood of the dream sequence. And Cody says costume designer Jade Bettin took initial costume ideas and ran with them, doing spectacular research and paying attention to details that further conceptualize the journey both the actors and audience traverse. Jeff’s lighting paired with Jade’s period costumes will pique imaginations and transform the stage from a physical space, to a fantastical world with no limits.
Cody says he’s thrilled to collaborate with scenic designer Daniel Conway once again. Daniel’s set has a circular frame creating a portal through which the audience views the story. This portal takes us from Canadian plains to European battlefields on a dynamic set that will evoke the many settings explored by the young lovers.
Experience the dream of Mary’s Wedding with us April 29th to May 3rd!
Click here for more information or call our box office at 919.962.7529.
View all Posts