Skip to the content
“I salute all the poor of the world.” 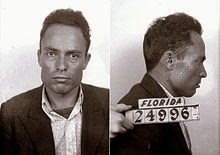 Giuseppe Zangara was born in Calabria, Italy in 1900. Following his mother’s death, his father emigrated with the family to Philadelphia. Zangara suffered from a mysterious stomach malady which caused him extreme discomfort throughout his life; as desperate a measure as an appendectomy failed to relieve his condition. Scraping a living as a manual laborer, Zangara became a naturalized citizen in 1929. Frustrated with his adopted homeland, Zangara attempted to assassinate President-elect Franklin D. Roosevelt at Miami’s Bayfront Park on February 15, 1933. Impaired by the festive fairground crowd, Zangara missed his target but fatally wounded Chicago Mayor Anton J. Cermak, who was in attendance largely as Democratic Party penance for challenging some of Roosevelt’s policies. Demonized as a madman, Zangara was sentenced to death by electrocution, defiant to the end of a capitalist system he felt had robbed both him and many like him of their opportunities and happiness. The five weeks between Cermak’s death and Zangara’s execution would be the briefest capital sentencing outcome of the Twentieth Century.

Joseph Medeiros is playing Guiseppe Zangara in Assassins, thru April 20. Make sure to catch Joseph in his PlayMakers debut!