“All progress depends on the unreasonable man.”
–Bernard Shaw, 1905.

Like its steadfast protagonist, Henrik Ibsen’s An Enemy of the People is itself a play which refuses to give way. One hundred and thirty-three years after its premiere, it remains undiminished both in its power and topicality. Its situations and characters, even specific references in the dialogue could have been conceived by any number of contemporary playwrights, and we’d be forgiven for assuming some of its dominant actions have been altered by translators to more closely approximate current events. But as our adaptation by Arthur Miller confirms, the underlying concerns of Ibsen’s play collapse time and cultures to speak directly to our historical moment, proving the aptness of Miller’s chosen title for his autobiography, Timebends. 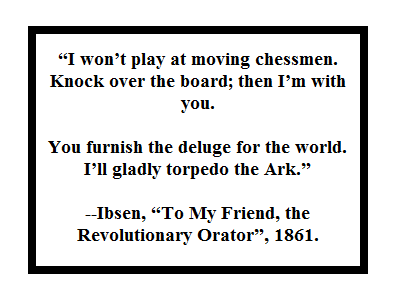 Such resonance can be partially accounted for in that Ibsen fearlessly strode right into one of the primal conflicts of democratic society, that of the individual taking a principled stand against the collective will. This dilemma is as old as Western drama, and in that light we can approach Ibsen’s play as a modern variant on Sophocles’ Antigone. But Ibsen fiercely pursues this conflict to the point where its quixotic extremity commands equal attention. As Ibsen confided to his publisher, “I am uncertain as to whether I should call it a comedy or a straight drama. It has many of the traits of comedy, but is also based on a serious idea.” That tragicomic tone contributes as much to the modern feel of Enemy as its parallels with whistleblowers, environmentalism, science colliding with vested interests, public debates driven by rumor and opinion, violently partisan politics and all collusions of the press.

Befitting an artist in the vanguard of Naturalism, upon beginning his play in 1882, Ibsen was already familiar with a pair of real-life models for his plot and protagonist. Fifty years earlier, a doctor in the spa town of Teplice (then part of the Austrian Empire, today of the Czech Republic) drew attention to a cholera outbreak during the height of the tourist season, necessitating his flight from a mob of vengeful locals. The second and more recent example was of a widely reported incident in 1874 involving a Norwegian chemist prevented from making a public speech denouncing his capitol city’s prosperous Steam Kitchen industry’s neglect of the urban poor. In both cases a determined crusading figure is beset by guardians of the status quo.

But the immediate catalyst for Enemy was the scandalous reception of Ibsen’s play Ghosts, published in 1881 and to be pilloried and denied Scandinavian production for several years. Ghosts critiqued conventional religion, bourgeois values, and included venereal disease as part of its narrative, resulting in an unprecedented storm of protest as critics strained to outdo one another in trumpeting their disapproval: “[A] disgusting representation” sniffed one review; “an open drain, a loathsome sore unbandaged, a dirty act done publicly”, proclaimed another. “Gross, almost putrid indecorum”, “literary carrion”, and “crapulous stuff” are further representative samples of the frenzied condemnations. 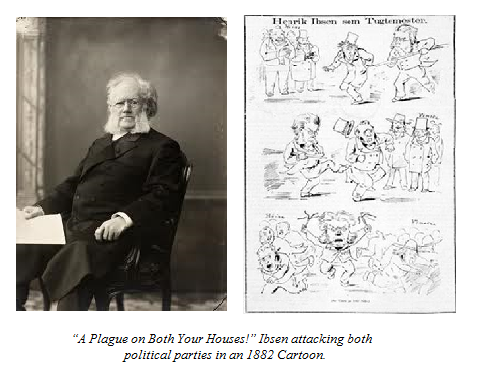 Ibsen responded with another work for the stage, unleashing the full brunt of his contempt for this

epidemic of provincial attitudes whether associated with conservatives, liberals, or moderates. Thus, An Enemy of the People, written more swiftly than any other Ibsen play, is a withering indictment of majority beliefs. But it is also a crafted and deliberate drama which is carefully contained in a five-act structure, and exhibits Ibsen’s characteristic mastery of symbolism and metaphor. Alongside its social problem play exterior, lie a moral parable about human corruption, and even a potential religious allegory of institutionalized faith (Peter), spiritual sickness (polluted water as an image of the impure soul), and a Doubting Thomas in the protagonist himself. In this, Ibsen’s play transcends the merely literal and his Stockmann takes his rightful place among a host of the playwright’s most notable characters, from the renegade Pastor Brand, and the prodigal Peer Gynt, to the non-conformist Nora Helmer and the tragically conformist Hedda Gabler, through the desperate architect of The Master Builder, the doomed financier John Gabriel Borkman and the decadent sculptor Rubek in Ibsen’s final play, When We Dead Awaken. Any and all might be designated an enemy, an identity which, in the name of progress, Ibsen dares us all to embrace.