In 1950, Arthur Miller was commissioned to adapt Ibsen’s play by the actor-director Robert Lewis, a prominent member of the seminal Group Theatre which established both modern acting and political commitment on the commercial American stage during its existence from 1931-41. Beloved Broadway veterans Fredric March and his wife Florence Eldridge would play the Stockmanns, and Lars Nordenson, a passionate, Swedish senator’s son would serve as producer. Not unlike the driving force behind Ibsen’s original, this revision of An Enemy of the People was rooted in indignation. March and Eldridge had been implicated in the rising tide of the Communist witch hunts led by Republican Senator Joseph McCarthy under the auspices of the House Un-American Activities Committee. Miller immediately grasped the affinities between the play and the current climate, identifying its core theme as “the crushing of the dissenting spirit by the majority, and the right and obligation of such a spirit to exist at all.”

To highlight this focus, Miller rang major changes on the original, tightening its action from five to three acts, leaving motivations more ambiguous than explicit, and rephrasing dialogue in contemporary colloquialisms to purge any semblance of Victorian sensibilities. Miller altered Ibsen in other ways as well, most significantly in suiting the tone of his version to the grimmer mood of the time. Still, Miller’s devotion to Ibsen, already apparent from All My Sons and Death of a Salesman, which had opened in 1947 and 1949, respectively, asserts itself as forcefully in the timing of this project as much as in its substance. To revisit An Enemy of the People at all in the Fifties was an act of political conscience. Miller has reflected on the decade throughout his career, coloring it an era of “gauze” with a theatre correspondingly sapped of vitality and heat. “For one thing,” he wrote in a 1983 essay, “it was a post-Odets and pre-Brecht time, when things artistic were supposed to deal with sentiments and aspirations, but never with society.” In taking up the Ibsen challenge, Miller was leading by example, publicly avowing the need to reengage with the world. 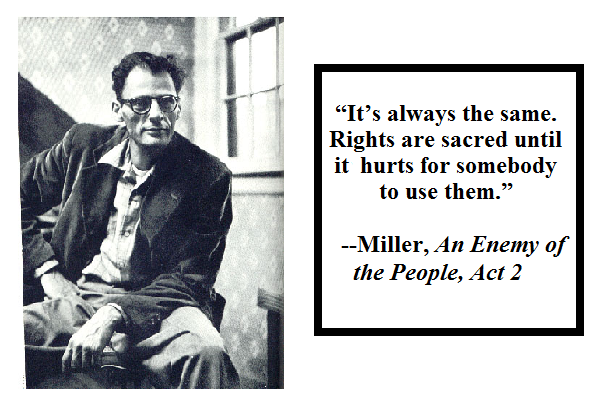 Though cautiously received by audiences who had mastered reserve as a survival strategy, the endeavor was liberating for Miller, who would go on to amplify his rallying cry three years later in The Crucible. Initially cowed by McCarthy’s power, when Miller found himself called before HUAC in 1956, he refused cooperation, ending in a contempt of Congress charge. As with The Crucible’s John Proctor, Miller “had his goodness now” and affirmed the same faith in personal dignity he had admired in broadcast journalist Edward R. Murrow’s 1953 television rebuttal of McCarthy, which concluded with Murrow’s defiant assertion, “We are not a nation of fearful men.”

The paradox, of course, is that such lofty individualism is as frequently resented and persecuted as lionized. And in our present context of heavy surveillance and heavier hacking, of WikiLeaks and Edward Snowden, of inflated college transcripts and deflated championship footballs, it can be more difficult than ever before to distinguish between the heroes and villains. More than three decades after his adaptation, Miller championed Ibsen’s play as “but one more evidence that the artist’s powerful desire to penetrate life’s chaos, to make it meaningfully cohere, has literally created a truth as substantial as a sword for later generations to wield against their own oppression.” 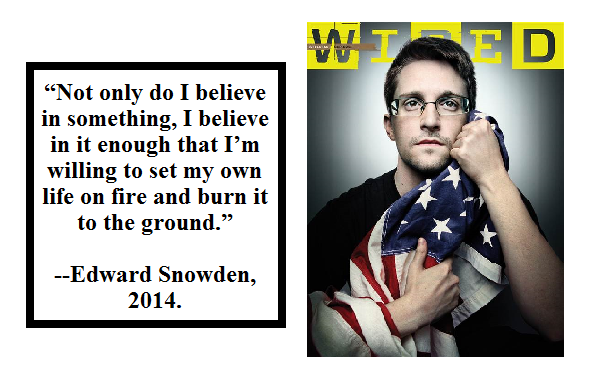 But like Ibsen before him, Miller’s Enemy and his subsequent works acknowledge the fragility of such a weapon, comprehending both the courage and potential folly in revolutionary zeal. A possible reconciliation of these viewpoints can be found in a statement made by an aged Ibsen at an honorary banquet in 1898, where he insisted on being “more of a poet and less of a social philosopher than people seem generally inclined to believe”, a claim as appropriate for Miller as well.
In his landmark study of Ibsen first published in 1891, fellow Ibsenite Bernard Shaw concedes the hazards of regressive majorities while cleanly identifying the shared battlelines Miller vividly dramatizes. In defining the contrary perspectives of idealists and realists, Shaw makes a strong case for reconceiving of such allegiances as follows:

“To the idealist, human nature, naturally corrupt, is held back from ruinous excesses

only by self-denying conformity to ideals. To the realist, ideals are only swaddling

clothes which man has outgrown, and which insufferably impede his movements….

It is always a case of ‘The ideal is dead: long live the ideal!’ And the advantage of

has supplanted; so that the destroyer of ideals, though denounced as an enemy of

society, is in fact sweeping the world clear of lies.”

However welcome or unwelcome, justified or misguided, reasonable or treasonable, the stubborn resolve of Shaw’s realists prevails. And as Ibsen and Miller’s linked plays suggest, there must be something in the human psyche to account for this deep sense of mission. But Ibsen and Miller go further in interrogating the limits of human reason and exploring the relativity of truth. Perhaps Shaw’s certainty is yet one more layer of protective illusion, and we are less available to ourselves and compelled by self-interest than we’d like to admit. An Enemy of the People refuses to comfort us with a definitive answer. It’s completely plausible that our rebels are informed by a higher awareness that legitimizes their opposition. But the contrary and darker perspective may hold equal validity: as Enemy might have it, in the end, maybe there’s just something in the water after all.

PlayMakers Repertory Company’s production of “An Enemy of the People” by Henrik Ibsen, adapted by Arthur Miller.