Earlier this month, Annette Storckman of Breaking Character interviewed playwright and actress Jessica Dickey about her one-woman show, The Amish Project. Read the short excerpt below and we bet you’ll want to click through to read the whole thing! 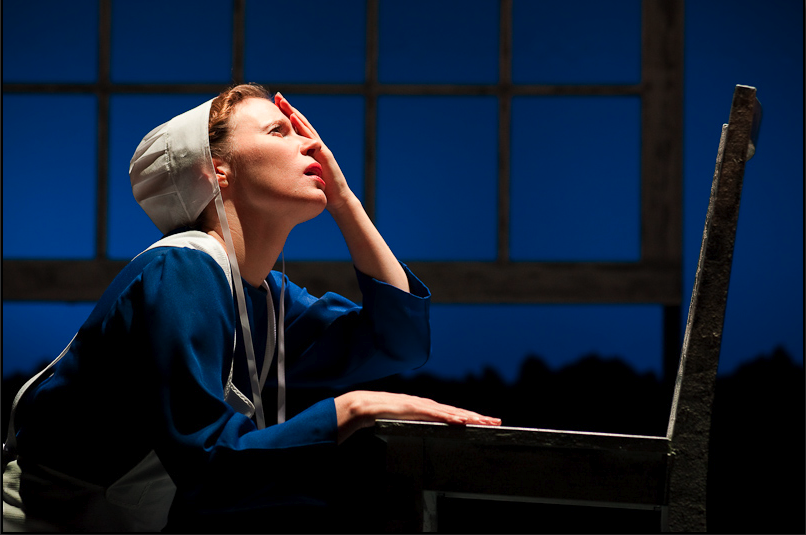 Forgiveness is definitely at the center of this play, which as you said is a staggering feat in the face of such a tragedy. In dealing with so many new mass shootings, do you feel the audience can forgive Eddie? Or do you think forgiveness is dependent on the time and place?
I think when audiences are watching The Amish Project, it’s a chance for them to consider forgiveness as an option of how we can respond to violence on a large or small scale. Forgiveness is not a new idea, but it feels so radical and large to consider, especially in the world that we’re in. The play provides this chance to consider these things, but passively as an audience member. It’s almost like you get to go on a trial run with yourself, but in the safety of your seat which I think is the first step to being able to actually consider doing it in real life. I don’t think that the play necessarily prescribes that forgiveness is the way we must respond to these things. But it gives us a chance to consider that option and to watch how it did play out with these people in the case of this shooting.

What are other elements of The Amish Project that stand out to audiences?
The thing I think surprises people about The Amish Project is how funny it is. It’s not funny like jokes—I don’t really know how to write jokes—but I know that my plays are funny. It’s just because people are so funny. I don’t know a single person that doesn’t have a sense of humor or a way of being that deserves the warmth of a chuckle, you know? For all of its harrowing events, I think audiences are charmed by the people of the play. They’re really quite funny and winning and charming, including Eddie. Certainly including Anna and Zelda. Carol is funny. America’s funny. Sherry is funny. I mean, they’re funny! The humor of the play is such a save because on the one hand, if we can get ourselves laughing then we’ve somehow latched to each other in the play. We know that we’ll physically fair better as we enter the darker themes of the piece if we’ve warmed up our chest by laughing. We will be more prepared and able to feel whatever the play makes us feel. I always want to remember that when I’m thinking about the darker notes that are, of course, in the piece.

What makes the theatre the ideal place to discuss and deal with gun violence?
Ever since people existed, there has been this need to congregate, to gather in one place, at one time and do something together. It’s tended to be a right of passage, a celebration, the marking of a moment—whether that’s weddings or a ceremony, a funeral. This is just as old as time. Theatre is one of the ways that we continue that tradition. I think that any time a group of people are present together in one space, there seems to be the promise of healing. That seems to be the nature of being together for something. We all just get together. There’s usually a common task or point of focus and that allows us to meditate on what it is to be together and what it is that we’re here to do and how are we to make a good life. It’s almost like by being next to each other and having to go through something in real time, like a piece of theatre. We can’t press pause and jump into another time when we have a meal and go do something and then pop back into the time we’re watching the thing. We have to stay with it in theatre. It asks for a real body, real time experience. It is because of this intimacy that theatre was the perfect companion for The Amish Project.

Still curious? Read the rest of the interview here. Then get your tickets to PlayMakers’ production of The Amish Project, on PRC2‘s Kenan Stage, Jan 8–12, 2020.