Elizabeth works in the PlayMakers Props Shop, which is responsible for building or borrowing all the props and furniture for each production, including The Making of a King.

“The Making of a World: Props for Henrys IV and V”
Down in the scene shop they’re putting on the final touches, onstage they’re focusing lights and painting late into the night. Upstairs the costume shop is racing to the finish, and directly above us we can hear the sounds of battle being staged. 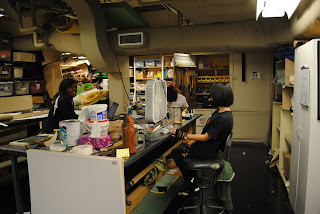 But what are we doing down in the prop shop, tucked away in the middle of the building?  Some days it seems like everything! The nature of a prop shop is wide ranging, and if it’s not worn or part of the stage: we’re doing it. We’ve got everything you need to wage two wars in two countries. On a thrust stage where the actual scenery does not change from one place to another, it is the furniture that indicates the shift from a London Palace to a battlefield in France. Let me give you a little idea of what’s going on in the shop. 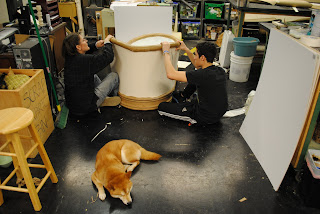 Today the front table is littered in letters, arrest warrants, and proclamations: paper goods are almost finished: a few royal looking seals, some ribbon maybe, and each set (there are many backups for each letter) will be packaged in an envelope, and labeled with scene number and short description
Over on the ironing table is a fur lined blankets for the Percys. Gets cold up in those northern castles I guess. Draped over one of the sewing machines is a pile of gold fabric; it’s just been turned into a Pavilion drape for the French. On the back tables Joncie, one of our fabulous over-hires is making a flask and holster for Falstaff.  We’re also working on reupholstering a chaise, and building a bathtub. Down the ships ladder in the carpentry area we’ve just finished with Henry IV’s bed and the bottom half of the chaise.

Then there’s the life sized boar in the hallway. We’ll call him Richard. We’re still not sure if he’ll be making his PlayMakers’ Debut with this show, but he’s fun to have around.

The Making of a King: Henry IV & Henry V is now playing through March 4. Click here for more information and tickets.