While we will return to costumes in very short order, I thought it might be time to ask “who this Nicholas Nickleby is anyway?” Dramaturg Anthony Fichera has been gracious enough to provide a brief character analysis of not only Nicholas, but his sister Kate as well. In the coming weeks, Anthony will help us understand other characters that affect Nicholas’ fate. 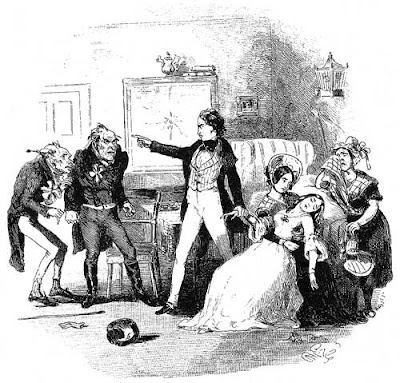 Barely out of his teens at the beginning of the novel, Nicholas fulfills, to a maximal degree, the idea of “a gentleman.” For Dickens, “gentlemanliness” is no longer merely a question of economics, caste or heredity. It has become an almost internally-defined, conception of one’s relationship to the world, one’s actions in relation to other humans and to one’s self. “Delicacy” “Kindness” and “Tolerance” are his keynote behaviors. In all his dealings, Nicholas, to a fault, seems incapable of harshly pre-judging or condemning others (would that he had been a little more peremptory with Wackford and Mrs. Squeers, the novel might have ended happier and sooner for he and his family). His almost instantaneous benevolence towards Smike, his benign regard for Newman Noggs, his achingly perfect regard for the unhappy Madeline Bray, the forbearance shown with regards to the chaotic kindness for the Crummles’s troupe of vain, posturing thespians: the marks of a man not superior by reason of monies but by feeling and regard (qualities Dickens inherited from the 18th century and centralized in his characterization). If Nicholas has a fault, it is one commented upon in the book (and frequently by those who have exacerbated it) as his “rashness” or “temper” (had Dickens been capable of receiving communiqués from the late 20th century, he would have immediately rejected the notion that Nicholas suffers from “anger management issues). In fact, Nicholas suffers from the inability to behold cruelty, callousness or meanness without reacting to it. Nicholas’s anger is never inadvertently directed at the innocent, weak or helpless (imagine our horror were he to lash out at Smike). It is always aimed at that which has rightfully evoked it. So it beggars the question whether this is a “character flaw” in any accepted sense of the word: Nicholas’s “flaws” seem only to exist in the minds of the low, the vicious and the cruel. Without exception, good people in Nicholas Nickleby instantly recognize the good in Nicholas and he reciprocates their regard without hesitation. If one needed any further demonstration of this, one need only look to the idea of “gentlemanliness” as practiced by the novel’s resolute rotter Sir Mulberry Hawk, for whom economic and sexual predation, and aristocratic hooliganism are quotidian matters, or his acolyte, Lord Frederic Verisopht, whose evolutionary turn from corruption to redemption comes at such a cost (i.e., his life).

“Be more natural Miss Nickleby,” insinuates Sir Mulberry Hawk in one of the more queasy incidents in the novel, the dinner party of Ralph Nickleby where he sets up his niece as the main course. Kate, of course, sees through this immediately. Purity and foolishness in Dickens are not equivalent states of being. Nicholas’s sister (her age is a bit hard to pin down but it seems to be her late teens) may be denied the scope for copious wandering and exploration of the world her bother is allowed (forced?) to experience, but she manages, in much more confining social circumstances, to be as much a gentlewoman as her brother is a gentleman. This, of course, means that she is kind, considerate and always mindful of other’s feelings. But lacking her brother’s “freedom” to explore her world, Kate is forced, almost moment by moment in the narrative to endure hardships and outright danger without compromising her sense of self (which is, as a “lady” constantly having to acknowledge humiliation and degradation without ever calling attention to the peril one’s status). So Kate’s progress in the play—right up to her actually saying “yes” to the very gentlemanly Frank Cheeryble—is a kind of social highwire act in which balance and negotiation are paramount. She seeks—many times without success—a series of “allies” who will recognize her peril and support her without the gross expediency of commenting on it. Only twice in the work does she actually call her attention to her wrongs in about the strongest possible terms she can “afford”: once to the clueless Julia Wittiterly (about, naturally Sir Mulberry) and once to her uncle Ralph (who’s villainy is such that he is deliberately violating acknowledged blood ties and abetting her humiliation by refusing, in essence, to aid her). So Mulberry’s taunt of “more natural” exposes both his lasciviousness and Kate’s essential perilous status: at once obligated to behave in light of family expectation, she is denied the emotional freedom of anger and just retribution available to her brother. The price exacted by gender is conspicuously on view with Kate.