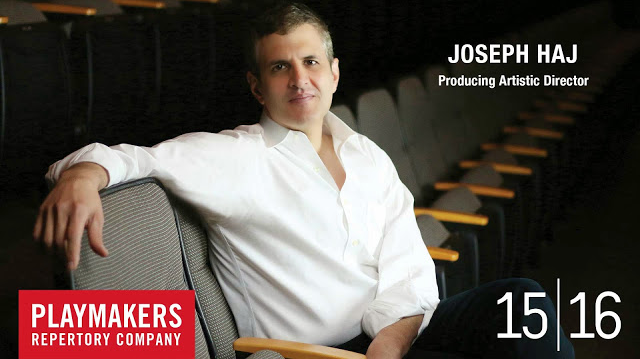 On June 11th at 6:30pm we’re hosting a special preview of the upcoming season including a Q&A with Producing Artistic Director Joseph Haj. WUNC’s Frank Stasio will join Joe onstage to discuss the 2015/16 lineup and what’s ahead for PlayMakers. It will be an evening of celebration for our PlayMakers family and the community.

As a prelude to our June 11th event, Joe sat down for an interview with PlayMakers dramaturg Jacqueline Lawton to discuss how he selects a season and what excites him about our new slate of plays. He also shares a few thoughts on his time at PlayMakers.

Read on for highlights from their conversation; then we hope you’ll join us on June 11th for more of Joe’s insider look at the road ahead and the chance to pose some of your own questions.

This event is FREE, but reservations are required, first come, first served, as space is limited. Please contact the Box Office at 919.962.7529 to reserve your spot today!

Jacqueline Lawton (JL): What guides you when selecting a season?

Joseph Haj (JH): A season ought to feel like a multi-course meal. If it’s all dessert, that’s no good. If it’s all meat, that’s no good either. Like any good meal, there’s a salad, a first course, an entrée, and, of course, dessert and coffee. We proportion the menu with a variety of dishes – larger to smaller cast shows, larger to smaller productions. We also want to give ample opportunities to our company – our resident acting company as well as the graduate students in technical and costume production. So, for instance, we ask – is there a play in period in the season? The students can’t just put jeans and t-shirts on characters all season long. There must be a variety of styles and approaches for educational purposes, along with providing variety onstage. So you see many factors are involved. But to answer the question narrowly, we choose a pattern of plays that make us sit up and say “THIS … this is the season we want to make.”

JL: The 2015/16 Mainstage Season opener is Disgraced by Ayad Akhtar. Why did you want to produce this play?

JH: I went with my family to visit my wife’s parents in South Carolina and Disgraced was one of several scripts I read over the weekend. I finished reading and was so disturbed by it. And all the other plays all kind of vanished. All I could think about was this complicated, atypical, challenging play. It caused me to think about ideas around, not just racial prejudice, but cultural assimilation. Anything that had me thinking for so long and so deeply about these important questions had to be a part of the season.

JL: Next in the lineup is Seminar by Theresa Rebeck. Why do you feel Seminar will resonate so well here?

JH: I love this play particularly in our world here, as a professional theatre on a university campus. The play deals with the dynamic of a brilliant, complicated teacher and four students, who pay a fair amount of money to be close to his genius and learn about writing. It says an awful lot about the dynamic between teachers and students, and the way we make heroes and knock them down. It also lines up beautifully for the magnificent actor, Ray Dooley, in the central role of the teacher, and four members of our acting company as the students.

JL: Then you selected Peter and the Starcatcher for the holidays.

JH: I wanted a family show for the holiday season, but the challenge is to find something that’s thrilling, fun, beautifully crafted, and not just for kids. So, I’m very excited about Peter and the Starcatcher because it truly resonates on an adult level as well as with young people. It’s an absolute delight, filled with invention and will feature 13-14 members of our acting company. Brendon Fox, who led terrific productions of Opus and Angels in America at PlayMakers, will be directing for us.

JL: Following that, we have the world premiere of a new adaptation of Anton Chekhov’s Three Sisters.

JH: Libby Appel, former artistic director of the Oregon Shakespeare Festival, is one of our great Chekhov scholars, translators, adaptors, and I love her new version of Three Sisters. I love her point of view. It’s smart and muscular. It’s not pulled out of period in any way, yet it feels contemporary in a way that feels close to us. To see Anton Chekhov’s great text through the lens of Libby’s expertise made me excited to do this play. And with a wonderful director like Vivienne Benesch, who’s been with us on multiple occasions (Red, In the Next Room, Love Alone), it will be in good hands.

JL: From there, we have We Are Proud to Present… by Jackie Sibblies Drury. What draws you to this play?

JH: I love this play. I love it formally. I love it aesthetically. I love its politics. A group of well-minded, well-intentioned folks get together to try to put on a play – which is something ludicrously hard to do under the best of circumstances. Then, in their exploration of the topics in the play, the wheels come off, which ends up being terrifically revealing about the undercurrents of prejudice that reside even in those of us who consider ourselves progressive. The play illuminates these ideas in insightful ways in the form of a very exciting piece of theatre. We Are Proud to Present… will be directed by Desdemona Chiang, who so beautifully helmed this season’s Mainstage finale, 4000 Miles.

JH: Sondheim is hands-down one of our great playwrights; and Sweeney Todd, which is almost entirely sung, is a masterpiece. A revenge story, it’s set against the meat grinder of the Industrial Revolution. This idea of the meat grinder – in the story there are people ground into pies – is a metaphor for a society grinding its own citizens into the dust. With themes of economic disparity, it speaks to our current moment in a lot of ways. I’m thrilled to have it in the season as another look at the masterworks of Stephen Sondheim, as last season featured Into the Woods.

JL: Why did you chose Uncle Ho to Uncle Sam and Highway 47 for the PRC2 second stage series?

JH: Uncle Ho to Uncle Sam follows the harrowing journey of Trieu Tran and his family from Vietnam to the United States. It’s a profound immigrant story. KJ Sanchez’s Highway 47 is another story about the American experience. KJ can track her ancestry in New Mexico back at least a dozen generations through the land given to her family through Spanish land grants. The play is about enormous battles in her family for the rights to that land. KJ is both writer and performer; as is Trieu Tran of his play.

JL: Being located in the Triangle area of North Carolina and based on a university campus, there’s a wide range of cultures, racial and gender identities, religions in our community. Can you talk about the efforts that go into making sure those communities are represented onstage in the plays and off stage in the audience?

JH: It’s an enormous challenge. Universities are often seen as ivory towers in their broader community. And theatres, institutional theatres, are often thought of in the same way. So when you’re a professional theatre housed on a university campus, you’re talking about an ivory tower inside an ivory tower in terms of perception. We’ve worked very, very, very hard over these last nine years to make the walls of the building more porous. To offer a broader sense of invitation – to really make clear that all of our community is welcome and desired to be part of our theatre.

JL: Share with us how you work to bring greater inclusion to theatre.

JH: The leader of an organization needs to determine whether diversity is a priority. And if it is, then you must be intentional about what you’re doing, at least some of the time. We work hard to make sure there’s inclusion of a diversity of voices across the season in terms of the work that we do. It’s a challenge when you’re a theatre dedicated to the classics, but there are ways, such as determining who gets to tell those stories, who are the directors and do you have gender and ethnic balance amongst those directors and who will design the plays. We’re very intentional about having a plurality of voices; different points of view. And not as a matter of checking boxes, but because we believe it actually makes the art better.

JL: Allow me to express a heartfelt congrats from all of us at PlayMakers on your appointment as the Guthrie Theater’s next Artistic Director. You’ve achieved so much during your tenure here. What do you feel most proud of?

JH: Thank you. It has been an honor to serve this community. I’m proud that we’ve built an audience, a community of people, who are interested in their own growth through participation in the life of a professional theatre. That’s a beautiful gift, and I’ll miss that entirely. We have an audience who comes not only to be entertained, to have a laugh or see a show that may be forgotten by morning. Our audience members are also interested in testing themselves … testing their ideas and their ideas about themselves. And that’s been built over time. When I came here nine years ago, we were a theatre making five plays a year. And I thought of something Ben Cameron, head of TCG [Theatre Communications Group], used to say. Ben said, “A good question for an arts organization to ask itself is what would be lost from the community if it were to shutter its doors?” I firmly held that question in mind when I started here. I remember thinking, if the answer is only five well-made plays a year, then that wouldn’t be nearly enough. That’s not nearly an important enough role for a regional theatre. I think PlayMakers has become an important part of the cultural fabric of this community. And for that, I’m very proud.

JL: And finally, what do you think you’ll miss the most?

JH: The greatest gift an artistic director can be given is the opportunity to make work for smart people; and we have an incredibly smart community here. Many patrons come to us as sophisticated theatre-goers and many more have become sophisticated theatre-goers by virtue of participating in our work. I’ll miss that a lot. Fortunately I’m going to the Guthrie, and the Twin Cities, an area also noted for supporting of the arts. I’m incredibly grateful for the support of this community and for what we’ve achieved at PlayMakers.