Scenic designer Robin Vest returns to PlayMakers to create the set for Guys & Dolls. She’s an SYC veteran, having designed last summer’s colorful take on 1960s Baltimore for Hairspray. Her other designs for PlayMakers include the sets for A Raisin in the Sun/Clybourne Park and Shipwrecked! An Entertainment.

Robin says “The most exciting thing about designing this Guys & Dolls is that director Jeff Meanza chose to set it in the 1930s, when the original stories on which the show is based were written. This really gave me an opportunity to re-invent the Paul Green Theatre and forget my preconceived notions of a bright graphic 1940s-50s set (the period the musical debuted on Broadway).

“I started by looking at photos of Times Square in the 1930s and Bernice Abbott’s book Changing New York, a collection of photos of all the neighborhoods of Manhattan, taken in the late 1930s for the WPA (FDR’s Works Project Administration).

“New York was a bustling place in the 1930s, but the spectacle of Times Square looks seedier. There’s less neon with more signs made of light bulbs. I was also taken with the fact that there were American flags hanging from the lampposts up and down the streets surrounding Times Square. The Great Depression was a very patriotic time. We were choosing not to enter the war brewing in Europe and put our energies on healing the country. 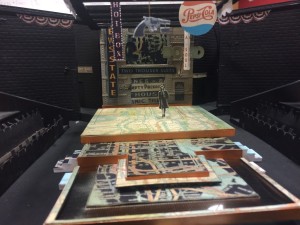 “I needed a sort of glue to hold all these ideas together in the theatre space and that became the image of “the subway.” I started with the wall upstage housing the band being modeled after details of a subway car. Then, when I was looking for inspiration for the floor the 1939 subway map followed.

“We set out to make a collage effect that reflects the story, the time, and the energy of 1930s Broadway. When we go to specific locations in the play, such as The Hot Box Club or Havana, we light up signs or add small pieces, we don’t do big changes.

“Anything can happen in New York. At any moment you can be anyone or find yourself somewhere new.”