Previews begin Wednesday and that means – Tech! Also known in the theatre world as Hell Week and with good reason. Tech refers to the stage of rehearsal when the company moves into the actual theatre for the first time. This is first time anyone has acted on the finished (almost) set; light cues are developed now that the actors on stage and sound cues are run in real time. This is a grueling process – painfully slow – sometimes even going line by line, while the tech crew and the designers add all of their cues. Around here, Tech usually starts the Friday before previews and runs through Sunday night. All total, the NicNic cast and crew were in the building for upwards of 36 hours over the weekend.
Another PlayMakers tradition is Sundown Supper. This is a dinner provided for the cast and crew by volunteers and PRC administrative staff. It always takes place on the Sunday of tech, because let’s face it – everybody’s too tired to go scrounge up dinner in the short break that they get. Because there are two parts to NicNic, there are two Tech weekends and two Sundown Suppers. The first, which took place on Sunday, had an English theme. A Shepherd’s Pie cook-off to be exact. Below you’ll see pictures from both the dinner and Sunday’s tech. 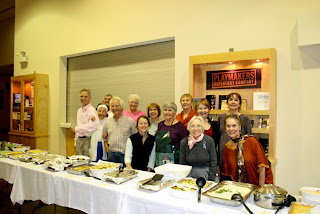 These are our Sundown Supper volunteers. These guys not only cook, they serve the cast & crew and help with set-up & breakdown. Our Suppers wouldn’t be possible without them! 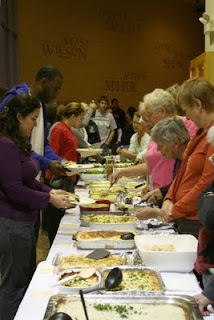 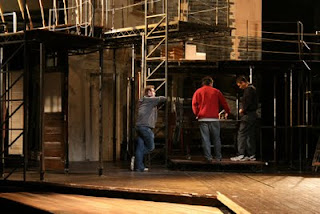 Co-directors Joe Haj & Tom Quaintance and assistant director Mike Donahue work out some staging logistics while the actors are still on dinner break. 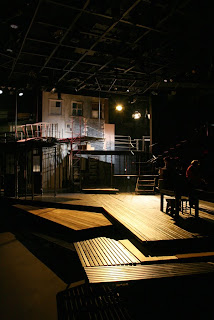 If you’ve been following the blog at all, you’ve seen McKay Coble’s set develop from a rough sketch to finished sketch to model. Here’s the real thing! It always amazes me how much it looks like the model! 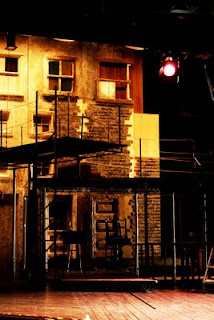 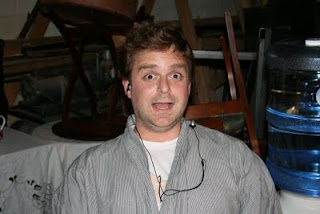 Even after 30 hours of rehearsal in two and a half days, actors’ spirits seem to be high. Above we see Jeff Meanza relaxing with his iPod as he waits for the evening session to begin. 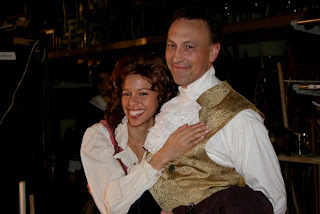 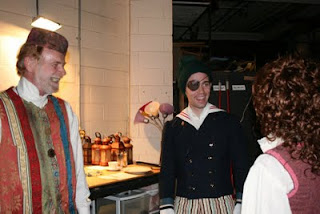 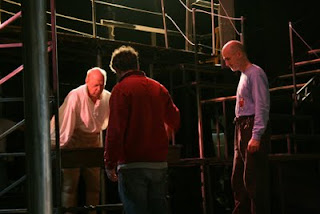 Tom Q. is often on stage during this Tech process, to talk to actors, designers and stage managers about what’s going on. 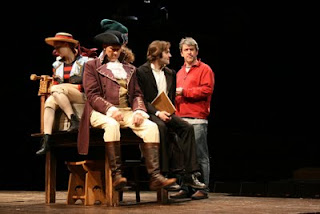 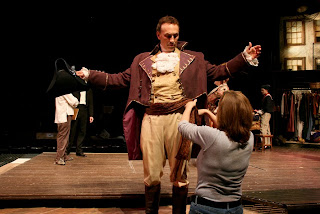 Costume designer Jan Chambers takes advantage of a break in the action to make some adjustments to Jeff Cornell’s costume. 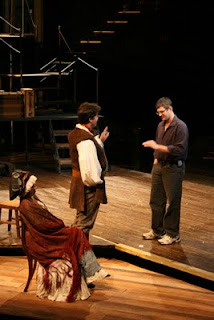 Joe H. discusses a transition with actors Jimmy Kieffer and Lenore Field.
Check back tomorrow for more pictures from tech! Coming later in the week, a new post from Rachel Pollock!
View All Blog Posts