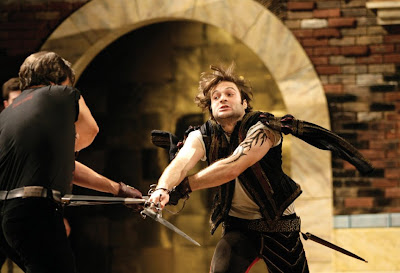 We had to interrupt our regularly scheduled blog this week for an exciting announcement. The role of Nicholas Nickleby has been cast! We are thrilled to announce that JUSTIN ADAMS, last seen at PRC as Mercutio, will return to perform in the title role.

Of his performance in PRC’s Romeo and Juliet, The Independent Weekly’s Kate Dobbs Ariail had this to say:
“Mercutio may be the best role in the play, and Justin Adams displays greater intelligence and humor than you often see and an unexpected delicacy. He swaggers cheerfully in his snug red pants; his barbs and challenges could be jokes.”
For the complete Indy article about Romeo & Juliet, click here:
A Fresh Take on Romeo and Juliet
While we are still pending the most updated bio from Justin (the agreement was literally settled on Monday), here is the latest one I found online. This is taken from the Alliance’s production of Eurydice last year. Additionally, here’s a photo of Justin from that show along with the show’s title actress, Melinda Helfrich. The photo is by Greg Mooney. 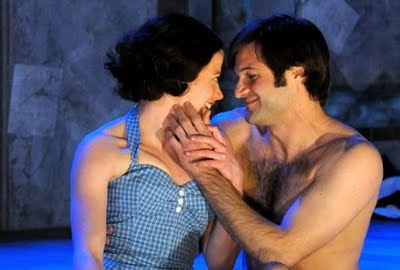 New York credits include Proteus in The Two Gentlemen of Verona and Petruchio in Love, Shakespeare with the Acting Company; Edward IV in Her Majesty the King (World Premiere) at HERE Studios; The Boy in The Municipal Abbatoir (NYC Premiere) at 13th St. Rep.; and Merlin in The Knight in Rusty Armor with the NYU Tisch Freeplays. He most recently was seen as Mercutio in Romeo and Juliet at PlayMakers Repertory Theatre. Other regionalcredits: Ethan in the World Premiere of Jesus Hates Me at the Denver Center; Lysander in A Midsummer Night’s Dream and James in The Miracle Worker with Texas Shakespeare Festival (in conjunction with Peking University). Film credits include: Independence: Beyond What She Expects, Babylion Productions; ASAS: Anatomy of Socially Awkward Situations, Arclab Productions; and Radio Cape Cod, Asilver Productions (upcoming). Justin is a recent graduate of the Royal Academy of Dramatic Art.