One of the advantages of having an in-house design and production team is that we can give you an insider’s look at what goes into bringing a huge production like Leaving Eden to the stage. We’ve taken you inside the costume shop before. Now let’s have a look inside the scene shop!

It all starts with design meetings between the director and designer, of course. Vivienne Benesch and resident designer Jan Chambers discussed the themes of the piece and just how expansive the set should be. For a show rooted in North Carolina and preoccupied with the idea of home, Jan know exactly where she needed to go.

“I was born in North Carolina, so the territory was familiar to me from the get-go.” Over the play’s development process, the story has come to focus more on today and into the future. “But I think it’s important for there to be a grounding in what was. And that’s where I started, with my personal connection to the land.”

The result is a 1/4″ scale model of the set so that everyone knows what they’re working towards. 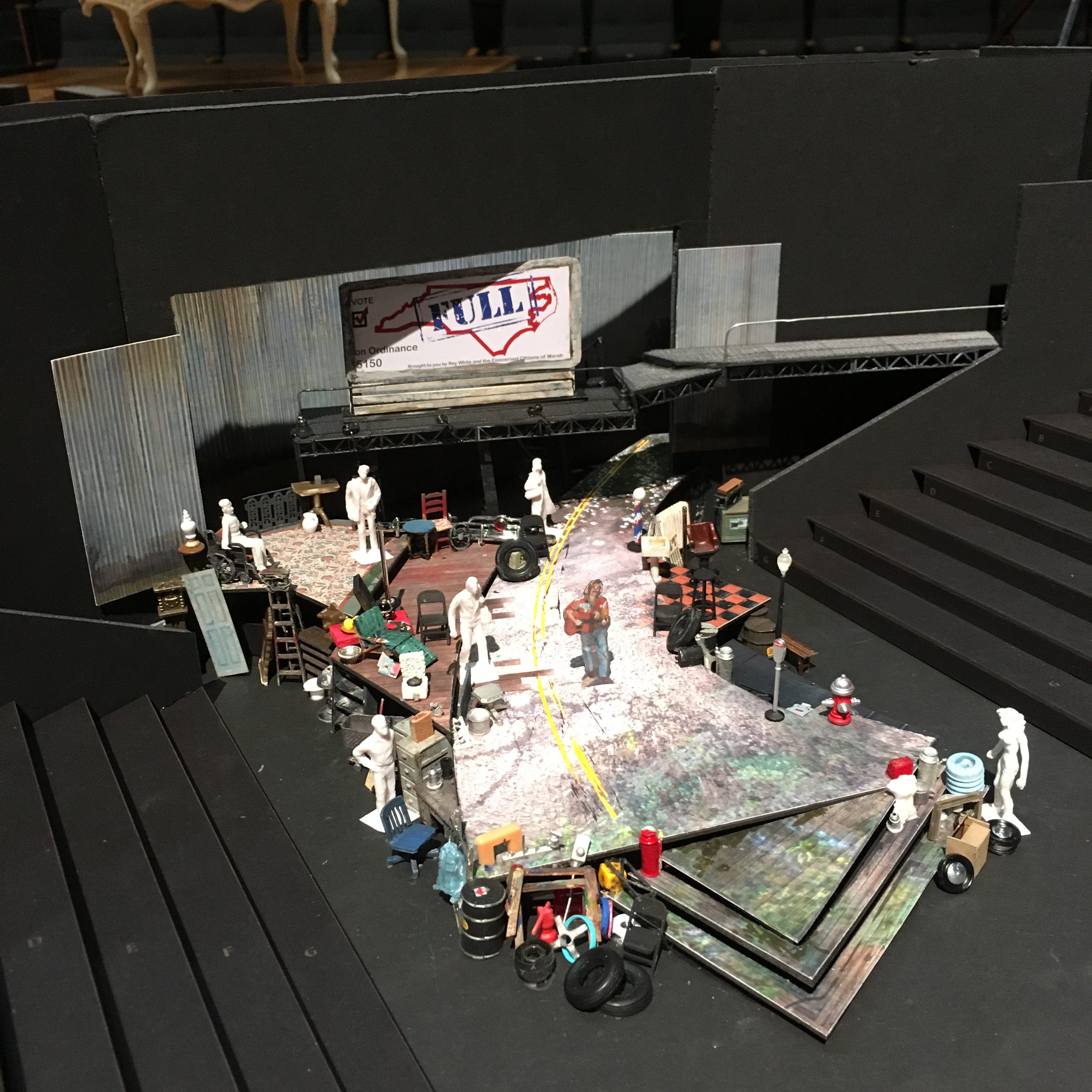 Our scene shop takes this scale model—plus the elevations and drawings—to bring the design to life. The basic design element is the stage itself—called the deck in shop parlance. Everything else takes shape around it. Much of the deck is built in our scene shop backstage and moved into the theatre itself over the space of a few days called load-in.

Here you can see PlayMakers ATD Laura Pates, the technical director on this production, guiding our production team of professionals and graduate students in the earliest stages of putting the deck together during load-in. 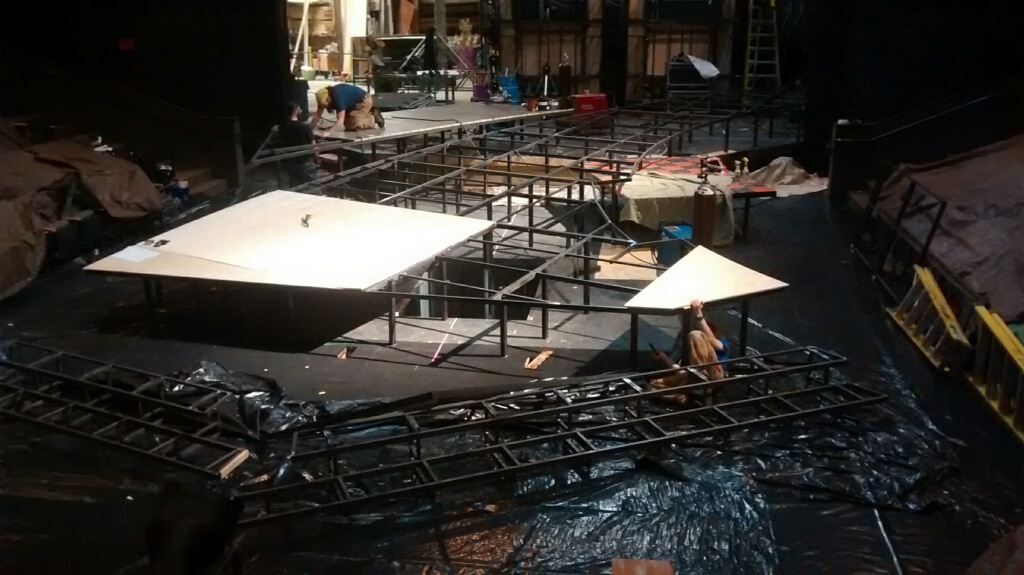 The Paul Green Theatre is set up in what’s called a thrust stage configuration, which means that the stage juts out into the audience. This presents unique design challenges on every show, especially for a play like Leaving Eden, which takes place across two different time periods. “Knowing it had to be a unit set, I wanted to give the sweep of the land, the sense of history coming out at you.”

“The stage is sort of multiple locals delivered in a unit way, so it’s not realistic, but you can play realism on it. There are sort of touchstones so the audience can understand where we are, but then it changes in an instant.”
Jan Chambers, Scenic Designer 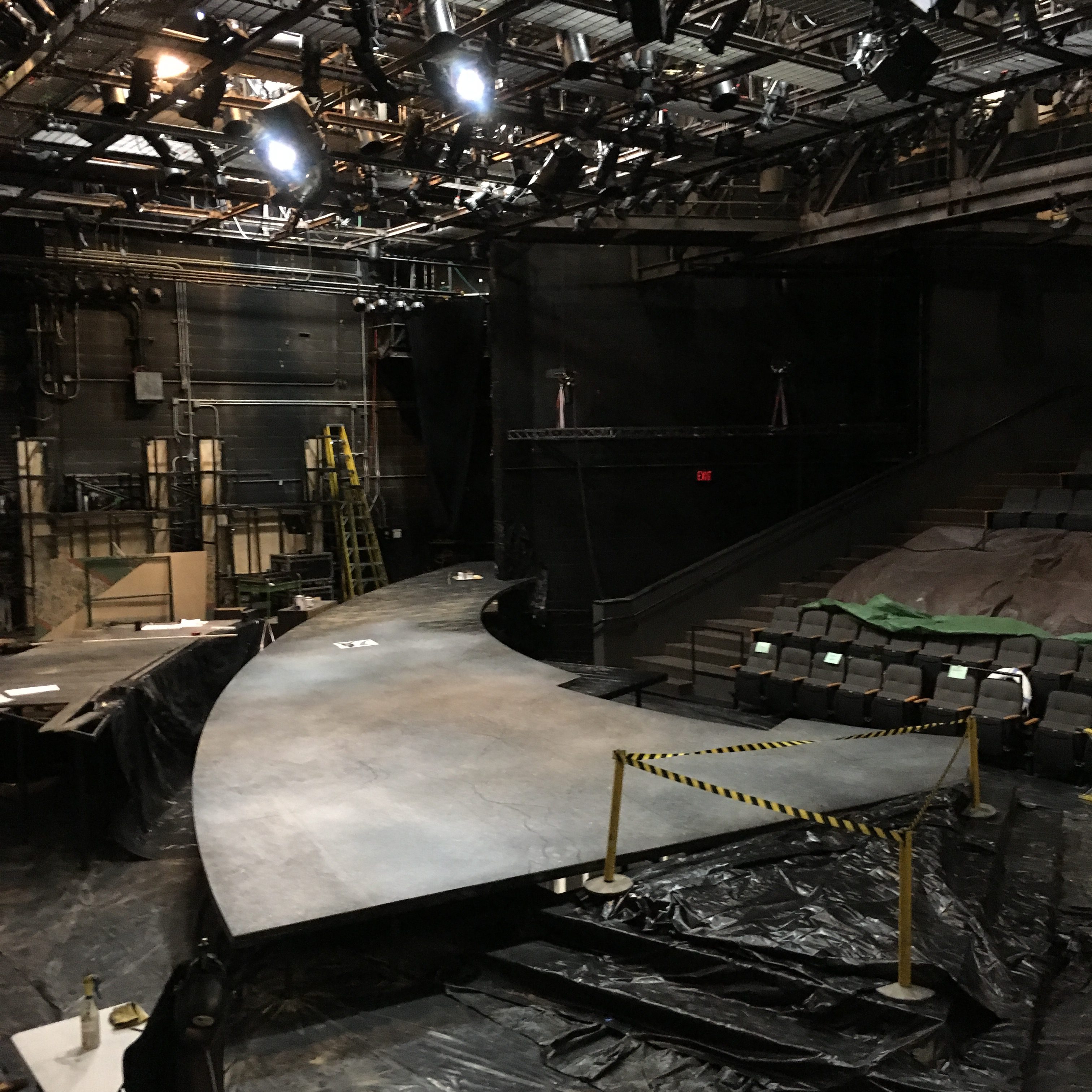 Get your tickets to Mike Wiley & Laurelyn Dossett’s Leaving Eden, on stage April 4–22.

Enjoyed this post? The behind the scenes look continues with paint texturing in Part II of our Getting to “Eden” series and dressing the set with props in Part III.