Through her intricate design of Neverland, scenic designer McKay Coble aims to transport the audience back to their childhood where magic feeds off itself and imagination. She wants to remind adults what it was like to be an imaginative kid and create something complicated out of nothing. “I want them to look at the set and go ‘Oh, I had a tree house like that, I had a fort. I’ve picked up a switch, and it was a sword.'” 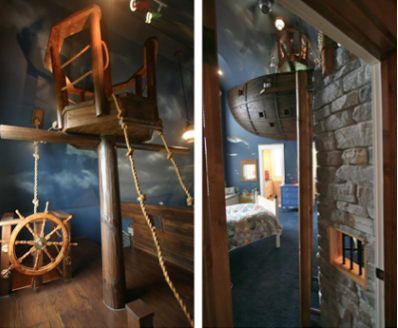 The design process was much different for this play. McKay first began by looking for common denominators in how children envision and imagine becoming a pirate. “I started looking at treehouses, ropes, ships and all the elements that going into the imaginative world where one might be a pirate. I also looked at found object art where you’re holding a spade and suddenly it becomes a bird.”

Sometimes a draft is made, then a model is built. In this production, sketching and modeling were done at the same time since the play is so active. With a large company of 13 cast members, all of whom are constantly doing something, McKay worked closely with the rest of the team to create actions on top of each other and build a world where anything can happen.
“I wanted this set to do a lot of things. It has mermaids, flying, birds, and cats; it has one of everything. The play has lots of opportunities for special effects, and that’s a challenge. The set has tons of props and it does everything- it spins and it flips. The technology PlayMakers has sets it apart from the other places where I’ve designed. The technology that we practice and teach is probably some of the best in the country. Our production shops are not afraid to do anything, and they can do anything. We challenge one another and stretch our abilities. There’s very little I can think of that they can’t do, so I’m not limited. I can think about people flying and magic without having to worry that we can’t do it- because I know we can.”

When McKay, who loves the story of Peter Pan, heard that Brendon Fox was directing, she knew she wanted to be a part of this production. “[Brendon] has a mind that runs 500 miles an hour and it’s invigorating. Sometimes it feels like you’re on a runaway train, but you’re always headed in an imaginative direction.” McKay says one of the best parts of working with Brendon is that he doesn’t come into a show with any preconceived ideas; he works with the team so that one idea triggers another. 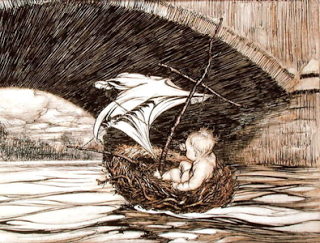 She and Brendon worked closely together while designing the set, looking at many of Chris Van Allsburg’s books, as well as illustrations from Barrie’s Peter Pan in Kensington Gardens. This research manifests its oldness in the set indirectly. “I can look at the original work by J.M. Barrie and a million images of Neverland, but for me it’s not about that Peter Pan, it’s about how he becomes Peter Pan.”

To McKay, this is the highlight of our production – the collaborative effort and imagination of the team in creating her vision of how Peter Pan comes to be. “It’s the kind of piece where everybody puts out ideas whether they have to do with their particular niche or not and everything works together through constant communication.”

Bring a sense of wonder and imagination and join us for Peter and the Starcatcher November 18 – December 12.