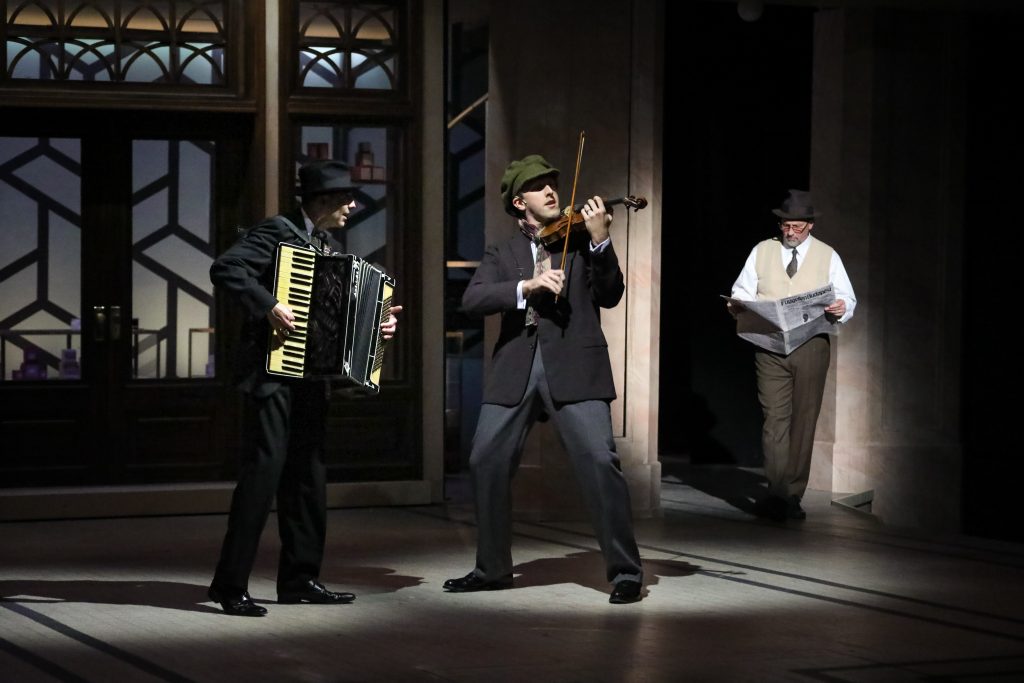 When the musical prologue begins here at She Loves Me—just a couple of street musicians with a violin and an accordion—you’ll realize pretty quickly that this isn’t going to be the lavish orchestrations of the original 1963 production with its 34-piece orchestra. No, music director Mark Hartman and his orchestrater, Jordan Ross Weinhold, have whittled the score down to fill out a 6-piece band.

But the new orchestration isn’t just about following the economic trend of dwindling orchestra size—even the most recent Broadway production had just eighteen—its a matter of director Kirsten Sanderson‘s vision for the show. “Mark and Jordan put this orchestration together with the understanding that it isn’t this sort of giant, big, brassy Broadway thing, but it ties to what all of us are working on in terms of making this a lived-in, realistically-based production about people in a struggling economy who don’t have big bands.”

“These new orchestrations are much more of an accurate reflection of an elegant simplicity to the score. It’s really exciting to hear.”
Kirsten Sanderson, director

Sheldon Harnick and Jerry Bock—best-known for 1964’s Fiddler on the Roof—aren’t new to Eastern European flourishes in their musical scores. Due to the smaller ensemble, Mark’s goal was to play up those flourishes as much as possible, making it feel very much like the cafe bands of the period. “We took what had been a Broadway orchestration and put it into the world that Kirsten’s directorial concept was after,” said Mark. In order to avoid the anemic sound of a pared down Broadway score, they had to determine what a group in this period would sound like. “Of course it’s lot of Hungarian violin, a lot of klezmer, clarinet. Accordion is all over the place in the score—even in the original orchestration. And there’s less of a drum kit and more of a percussion section kind of sound. It’s very much a small, house band.”

With these things in mind and the help of local musician Wayne Leechford, Mark was able to assemble and orchestrate for a six-piece band of exceptionally talented musicians: PlayMakers regular Alex Thompson on synthesizer, Joan Beck on violin, Paul Hannah holding down the percussion section, Jake Wenger on cello, and music coordinator Wayne Leechford himself on reeds. Together they sit above the action—much as they actually would have in a cafe in Budapest, like the one featured in the “Romantic Atmosphere” sequence—and even become part of the action from time to time.

Audiences will find that between the orchestrations and the skill of this Hungarian dance band, Harnick & Bock’s timeless score feels so lush and full that you won’t believe there are only six musicians. So get your tickets and be transported to 1930s Hungary for an evening of love, joy, music, and (of course) ice cream.

She Loves Me is on stage at PlayMakers Repertory Company now through Sunday, December 9. Get your tickets today!