In keeping with the pattern of the season so far, the first rehearsal of Bewilderness almost didn’t happen thanks to Winter Storm Diego. But Zack Fine took it all in stride. As he walked to PlayMakers on the first Tuesday following the storm, he found himself thinking about Henry David Thoreau, as usual. “As I was walking here in this beautiful snow in this beautiful town with these beautiful people, this Thoreau quote was going through my head.”

“Surely joy is the condition of life.”
Henry David Thoreau

We’re certainly overjoyed to have Zack back in our building after his delightful turn as Duke Theseus and the fairy king, Oberon, in A Midsummer Night’s Dream. This time he plays himself, bending time and space to meet up with Henry David Thoreau in his cabin near Walden Pond in Bewilderness, an absurdist comedy about time, change, and the condition of life. 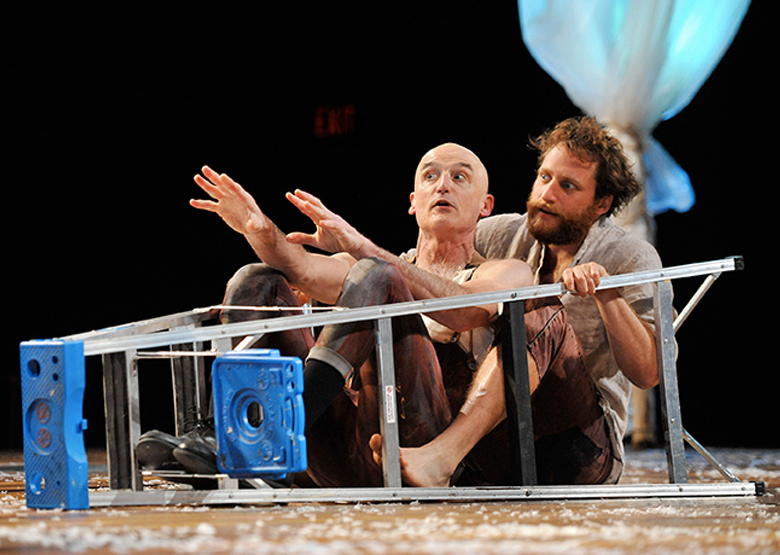 How was it? It sold so poorly that the publisher returned all remaining copies to the author.

“I have now a library of nearly 900 volumes over 700 of which I wrote myself.”
Henry David Thoreau

This was the book he originally wrote while living in that famous, 10′ x 16′ cabin on his buddy Ralph Waldo Emerson’s land. He didn’t live there as a hermit, as some have been led to believe. Part of his “wish to live deliberately” meant entertaining visitors and making regular trips to town. When his friends and neighbors began to ask what he did all day at the pond, he suspected he had a book in it.

But failure came first and that’s what Zack is interested in. “It’s an absurd meditation on failure and process,” said the playwright. “I’m just so excited to discover what this thing is, to discover it together, and to be a part of this artistic community at PlayMakers. I can’t wait to begin.”

Catch Zack, Henry, and a host of other surprising characters in this joyous comedy about what it’s like to be alive. On our Kenan Stage January 9–13. Get your tickets today.