PlayMakers’ relationship with Richard Wright’s Native Son extends over several decades, with the first stage adaption headed by both Wright and Paul Green in 1940. In 1977, the Paul Green Theatre was dedicated with a production of the adaptation by the then Carolina Playmakers and Department of Dramatic Art. 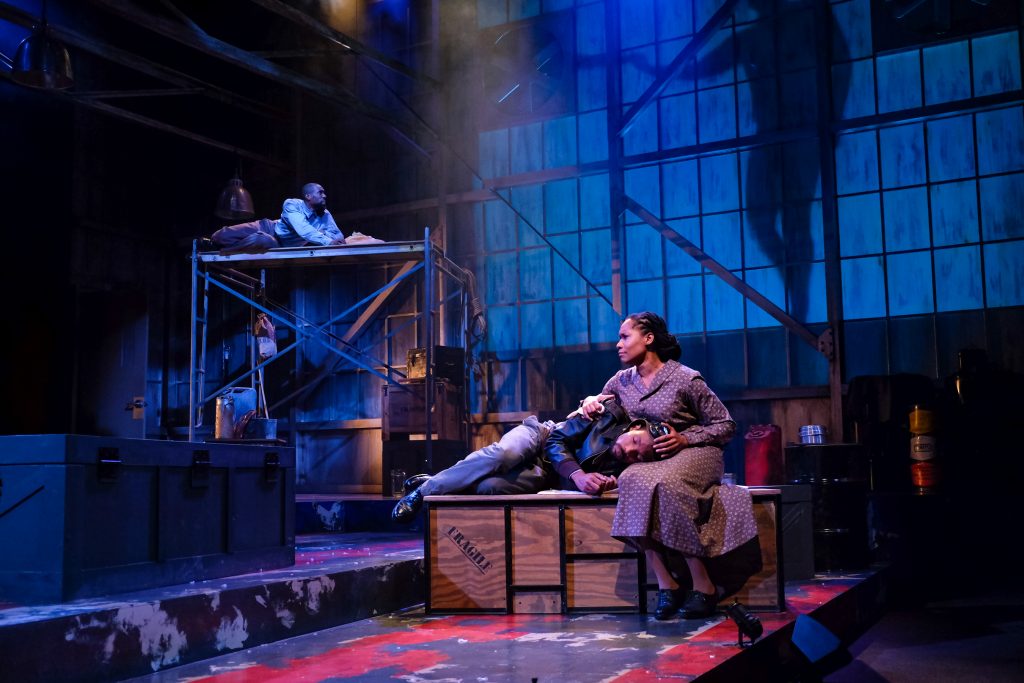 Director Colette Robert worked to bring Nambi E. Kelley’s more recent adaptation of Native Son into the light of “now,” hoping to make the story of Bigger Thomas one that resonates with audiences of today just as much as it did almost 80 years ago.

“I’m interested in exploring where the hope and the light is in this very fractured, fascinating play,” Robert said. “This is such an American story.” 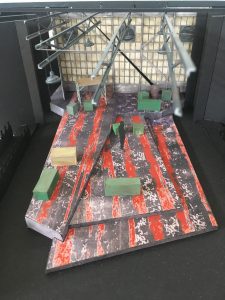 Colette and set designer Lawrence E. Moten III set Bigger’s story in an airplane hangar, depicting a concrete floor that once bore the image of an American flag, now a chipped, distressed symbol of neglect. Bigger’s dreams of being a pilot, like the hangar, are abandoned and unattainable because of his skin color.

“We looked at lots of airplane hangar images, thinking about Bigger and his desire to fly and his inability to fly,” Colette said. “What if we put him in this space when all he wants to do is fly, if he can’t?”

Scenic Charge Artist Jessica Secrest painted the flag almost entirely by herself. First laying down the simulacrum of concrete, then using a wood blocking technique to give the peeling effect, she laid down the white paint, going over portions of it again in red for the flag’s stripes. Then, with the help of Laura Pates, Assistant Technical Director on the show, she laid out the star pattern and repeated the technique there. Finally, she washed the stage with a watery brown sealant to indicate the age of the hanger facility. 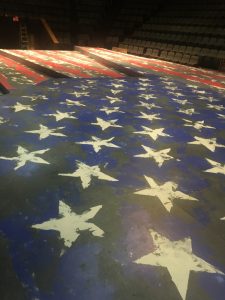 The stage, comprised of three different levels, is littered with natural wood crates to be used as tables, chairs, a car, and even a furnace throughout the show. The entire back wall of the set is made of rusted out windows.

“We’re going to do a lot of silhouette-y stuff,” Colette said. “This wall of windows also has a little trick in it that opens up. So we’re going to figure out the best dramatic times to do that, but also play with the fractured, broken idea.”

As far as tricks are concerned, lighting designer Reza Behjat said the play is going to require “every trick we’ve got” to pull theatergoers rapidly from scene to scene and give the impression of compression, claustrophobia, and the constant theme of an America fractured by oppression and violence.

“I want us as a community watching this story to think about the brokenness and fragmented state of our country now,” Colette said.