The world premiere of Charly Evon Simpson‘s Jump is just around the corner. Coming on the heels of Zack Fine‘s comedic production Bewilderness, this incredibly theatrical new drama helps to balance out the season by revealing the magic that can happen when family members—or even strangers—work towards building bridges of empathy, hope and, love. 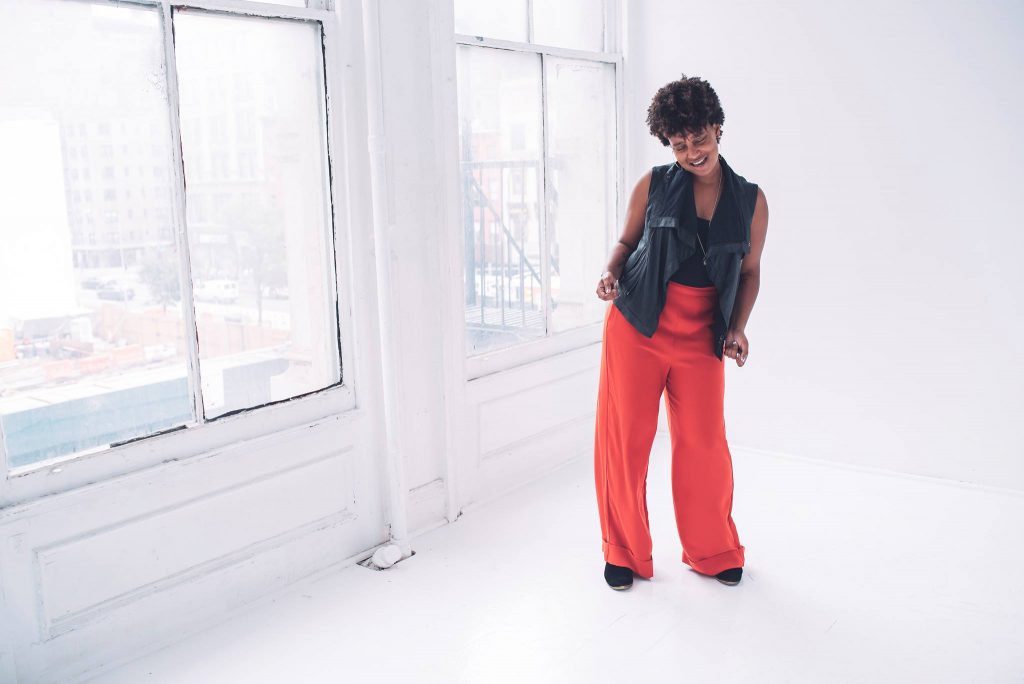 Dramaturg Mark Perry sat down with Simpson to learn more about the production. Here’s a bit of their conversation.

Perry: What’s the main thing you want people to know about the background of the play?

Simpson: One of the things that I think about a lot is that we often don’t see a black family deal with grief and suicide in this manner. A lot of our stories as of late have been about horrific things, and for good reason. I was asked this summer “why is this specifically a black family?” It’s because we experience this too. It’s a universal story, therefore we should be able to step into those roles as well. It’s important to me to recognize this subject matter. My goal isn’t to make people cry! But to explore these realities and explore them in the bodies of folks that we don’t often get to explore them in.

Perry: Are there signal ways that you see in the play that are specific to it being a black family?

Simpson: My short answer is ‘no.’ There are specific things that are not in the play but that I’m thinking about: For instance, traditionally, black families haven’t had access to therapy or haven’t been comfortable going to therapy. It’s not explicitly said, but often we have black families dealing with these things and not feeling like therapy is an option. It seems to be changing as mental health is talked about more and more in different communities. But the absence of that might be the most prominent example of the race of the family being a subject of the play.

Simpson: I think the way that I personally connect to the play is that I’m not necessarily a bridge-walker, but I am a ‘let-me-go-to-a-water-source-and-stare-at-it’ person. I think, for me, the play is about characters who want to take a break from their life, to take a breath. I was interested in a place that people go to take that breath, but that also can be the site of something where people have no hope. They also can decide to take their lives or contemplate the heaviness of that place. For me, a site like that helps me gather the energy to go back into the world, but I recognize that for others they realize that they can’t go back into the world. Bridges literally connect us from one place to another, but they’re also these liminal spaces in between.

My bridge is the George Washington Bridge, and I would never walk across because it’s too high. (laughter) But I still love looking at it longingly, and I still like to drive past it. For most people, they just pass through on their cars. But some people stop. These two characters, Fay and Hopkins, are standing there together, having this intense conversation, and there’s somebody just in their car going by. They’re all for a moment in this one space and having a very different relationship with that one space. I was interested in finding a space that held all of that.

From a theater perspective, there’s the height of the bridge. From the perspective of the audience, we’re the water. We don’t usually have that relationship to a bridge, so I thought that would make a beautiful stage picture, of people elevated in their passion or disconnectedness or something.

Perry: Does this family have any safety net outside of themselves?

Simpson: We mention that there’s an Auntie that Dad stays with. There’s an element of isolation, for some reason they’ve carved out this family unit for just themselves. There probably is family out and about but they know each other really well and it’s in their hands to deal with this. I picture Dad, Fay and Judy declining support from that family. Plenty of black families would not be like that at all. But this is an example of a family that has carved out their own unit.

Perry: This is endemic in our society, more and more people are this way. Part of it has to do with how people move around, but part of it is chosen.

Simspson: I don’t know how to write two parents in a household. Often one parent is gone in my stories. I’m clearly personally dealing with this question in this play. Who takes care of who? Who can you connect with? How do you grieve? How do you protect each other? How do you hide from those that we know who know us the best? … I lost three family members while writing this play. That unit getting smaller and smaller and smaller. I think I’m obsessed with those questions

Perry: Where do you think redemption is? How do we rebound from where you start us off?

Perry: And that requires trust and trustworthiness.

Simpson: I think it’s really hard. It’s fascinating how hard it feels to be that way. There are people who say, “I had no idea you felt that way.” Because at some level, I don’t trust that people will be that way. I’m certainly learning who the people are that you should trust. Who’s worth that work? For your sake, you have to be able to share that. I do hope that in the play is like at the end, the healing process is only beginning. That this can be a unit, but a more open unit. I hope sometimes that maybe that’s the only thing we can ask for. That your chosen family, you can be that open and honest and transparent with. I hope there’s redemption in that.